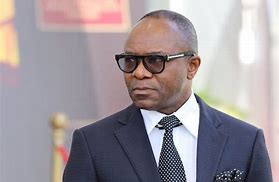 The Ministry of Petroleum Resources has just issued a strongly worded statement in reaction to recent media reports claiming that, the House of Representatives on Thursday, 24th January, 2019 said it would investigate the Minister of State for Petroleum Resources, Dr. Emmanuel Ibe Kachikwu, over alleged irregularities in the ongoing oil and gas lease renewal.

The report further stated that the House would also probe the involvement of the Department of Petroleum Resources (DPR) on the same matter.

The ministry said the process was transparent and followed due process.

” It would be of essence to note that the early lease renewal programme is a process ingeniously developed to expand and speed up earning potential from the renewal programme for the Federal Government and to also create security of title to leaseholders so as to allow them continue the massive investments needed to improve production from their fields, said the ministry in a statement.

” The process would start with an application from a lease holder, an evaluation from Department of Petroleum Resources, followed by a review by the Honourable Minister of State, Petroleum Resources and culminating in a recommendation to the President for final approval.

Based on the report, the Minister of State and the DPR await the advertised invitation from the House of Representatives, and as always, would respond to clarify any misunderstandings the House may have on the renewed leases as part of the normal oversight functions of the Assembly, the ministry further stated

” We would like to state that the Minister of State and DPR are proud of the enormous work done on early renewals, the unprecedented revenue raised under the programme, and the effect it has had on investment. The Ministry would also use this opportunity to clarify that the early renewal programme applies only to renewal of existing leases and does not involve issuance of any new licenses for oil fields.

Dr. Emmanuel Ibe Kachikwu
Share
Subscribe to our newsletter
Sign up here to get the latest news, updates and special offers delivered directly to your inbox.
You can unsubscribe at any time

Kim Porter Cause of Death Revealed as Pneumonia