PDP will regret suspending me -Gamawa 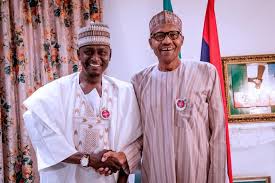 The suspended deputy national chairman (North) of the Peoples Democratic Party (PDP), Babayo Gamawa, who has joined the governing All Progressives Congress (APC), has vowed that the opposition party will regret their action.

The PDP said Gamawa was suspended by the National Working Committee (NWC over allegation of dereliction of duty and anti-party activity.

Gamawa, who described his suspension from the PDP as undemocratic and unconstitutional, told State House Correspondents Tuesday night after meeting with President Muhammadu Buhari where his defection to the APC was made known.  A member of the opposition party’s Board of Trustees, Kaulaha Aliyu, also defected to governing party.

Gamawa who defected barely 24 hours after his suspension said: “I have no regret for defecting from the PDP and they (PDP) would regret their action, by God grace.”

While insisting that his decision has nothing do with his suspension from the PDP but has everything to do his love for the country said: “As a Nigerian, I want what is good for the country; I want good image for my country and I want to see development and progress of the country.

“And I have been saying it, as a politician, I play my politics not blindly. Whenever thing goes right or wrong I will say it the way it is. As Journalists, you are aware of what PDP did today – just because of an allegation they said they have suspended me.

“I want to call on them to check their secretariat. If they are in politics they should know what is happening on daily basis at the secretariat – what comes in and what goes out. They should check their mails and they will know the position of Sen. Babayo Gamawa before their action of today.

“I have no regret for defecting from the PDP and they (PDP) would regret their action, by God grace,’’ he said

Also speaking Bauchi State Governor, Mohammed Abubakar expressed delight over the new political development, saying the defectors were in the presidential villa to pay political homage and pledge their support to the president.

Abubakar, who expressed delight over the decision of Gamawa and Aliyu to decamp to the APC, said: “You can see I’m very delighted because with these gentlemen I can go to sleep with my two eyes closed, so to speak.’’

On his part Aliyu, said he joined the APC to ensure electoral victory for President Buhari in the forthcoming general elections.

President Buhari  received  a formal pledge of allegiance from the detectors acommpanied to  the State House by the Bauchi state Governor.

The President Buhari held a strategic meeting that lasted over 30 minutes behind closed doors.

Gamawa
Share
Subscribe to our newsletter
Sign up here to get the latest news, updates and special offers delivered directly to your inbox.
You can unsubscribe at any time