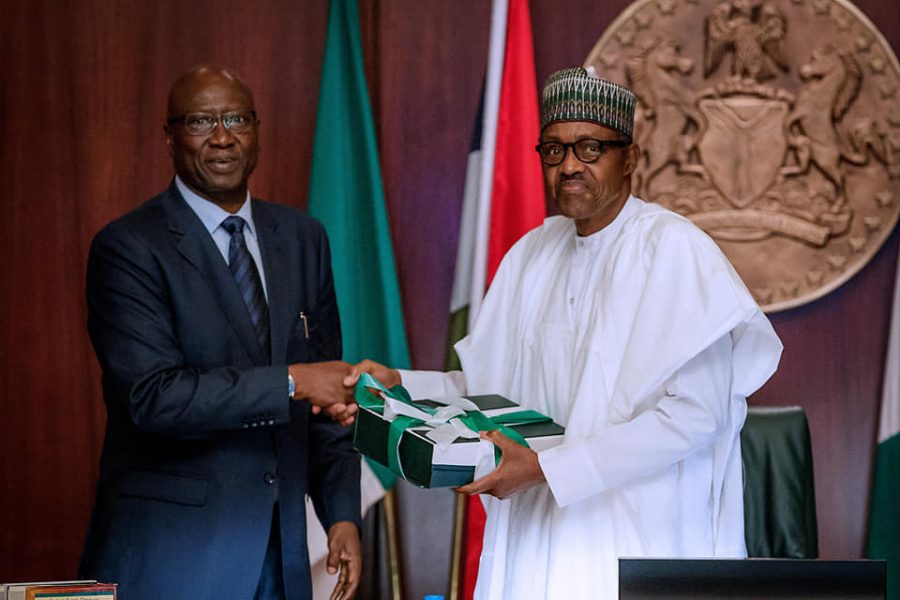 The Secretary to the Government of the Federation, Boss Mustapha who received the report on Monday, assured Nigerians  that it would be expeditiously processed for implementation.

The Chairman on the NHIS Board, Ifenne Enyanatu, had on October 18, said it had suspended the Executive Secretary after obtaining permission from the Minister of Health, Prof Isaac Adewole.

A day after the pronouncement, Yusuf disobeyed the Governing Council and resumed at the headquarters of the NHIS in Abuja under police protection.

The SGF said at the submission of the report that, “I receive this report with deep sense of appreciation and I assure you that the report would be expeditiously processed for implementation.

“I must thank you most sincerely for all the sacrifices made to ensure that this healthcare Scheme which also borders on our security as a nation is made to stand firm on its feet and remain beneficial to all Nigerians.

“Let me assure you that the decision of government on the recommendations of the Panel will be made public at the appropriate time.  I also want to assure all Nigerians that this government remains very committed to making life worth living.”

Mustapha recalled that the federal government approved the constitution and inauguration of boards and governing councils of its parastatals in March, 2018.

He noted that during the inauguration, emphasizes were placed on key areas on the powers and responsibilities of the boards, in addition it harped on the essence of good working relationship between the boards and the management while ensuring that the day-to-day operations were not interfered with.

Mustapha  said in order to bring new board members and their chief executives up to speed on current policies and programmes of government as well as legislations guiding ways of conducting government business, broad-based induction courses were organized.

He regretted that despite these efforts, government continued to observe that different scales of schemishes erupted from board rooms into public domain.

“With particular reference to the situation at NHIS, government regards the Scheme as critical to its promise to Nigerians that they would enjoy qualitative and affordable healthcare.  Government also regards healthcare delivery as a cardinal programme on which huge investments have been committed because a healthy nation is a wealthy nation.

“Given the foregoing, therefore, Mr. President on the recommendation of  my Office approved the constitution of a 7-Member Presidential Independent Fact-Finding Panel headed by a retired Permanent Secretary to look at the immediate and remote causes of the conflict that engulfed the NHIS.

“The Panel was inaugurated on Friday, 2nd November, 2018 and charged with a 5-point Terms of Reference (TOR) including the responsibility for examining all governance issues challenging the Scheme.

“The Panel was given 2 weeks to submit its report. However, the assignment had to be extended due to the nature of the work and the need to address core issues on a lasting basis,” he added.

The chairman of the committee, Dr. Buhari Hassan explained that the panel did not complete its work within the two weeks it was given because of the quantum of the documents it had to go through and the number of stakeholders it needed to interface with as well as the need to b fair, transparent and unbiased..

He said the report contains set of recommendations, which may be considered short, medium and long term.

Hassan said, “We particularly wish to draw the attention of the government to the key recommendations for urgent attention.

“It is our belief and aspiration that our recommendations as contained in the report will go along way in repositioning the scheme as they proffer solutions to the challenges that have hindered the scheme in achieving the laudable objectives for which it was established.”

FG promises speedy implementation
Share
Subscribe to our newsletter
Sign up here to get the latest news, updates and special offers delivered directly to your inbox.
You can unsubscribe at any time