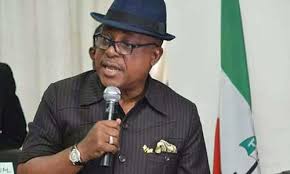 The National Chairman of the Peoples Democratic Party (PDP), Prince Uche Secondus has accused the Economic and Financial Crimes Commission (EFCC), and the Nigeria Police Force (NPF), of entering into a secret pact with the All Progressives Congress (APC), to cripple states controlled by PDP ahead of the 2019 general elections. Secondus who disclosed this in a statement signed by his Special Adviser on Media, Ike Abonyi, noted that that the move, which is aimed at causing severe and disabling damage to the states, is part of the grand design to distract PDP from its focused journey to reclaim power and rescue this country from the inept rule of the APC.

He singled out Bayelsa state that had eight Police Commissioners in three years, as well as Akwa Ibom and Ebonyi states, where the Police leadership in the states were changed randomly at the dictates of APC government. The statement quoted him As saying: “In Akwa Ibom state Assembly crisis engineered by the APC, the Police clearly became an interested party, playing a bias role to ensure it danced to the music of the APC.

“In most PDP states, despite the governors being the statutory chief security officers, Police Commissioners have set up parallel  structures to undermine the security of the states to satisfy their pay masters.

“They resolved to inject crisis in PDP controlled states and ensure that our governors who are refusing to play ball are permanently distracted. He further disclosed that, “they have deployed huge cash in these states to either use labour or state legislators to inject crisis, frighten the governors and force them to do a deal with them.’’

Peoples Democratic Party (PDP)
Share
Subscribe to our newsletter
Sign up here to get the latest news, updates and special offers delivered directly to your inbox.
You can unsubscribe at any time