The Reconstruction of Obahiagbon in the Senate Race 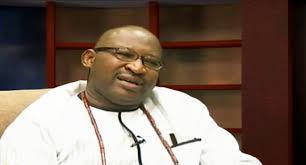 Share
By Sufuyan Ojeifo
If I had thought that Honourable Patrick Obahiagbon, the son of Igodomigodo, was not a very popular brand, that thought would have perished on December 16, 2017, when he stormed the ancient city of Owo in Ondo State, at my behest, for the celebration of my mother’s 85th birthday.
Don't Miss

Nov 28, 2022
As he alighted from his black Prado Jeep at the venue of the event, you could see the spontaneous reactions by some youths on seeing him. I could not believe that in some corners that seemed far flung from “civilization”, the Obahiagbon persona would resonate with the kind of enviable approbation that it elicited.
The youths launched into a frenzied adulation of him; and, in his usual sedate manner, he acknowledged the cheers and the chants. He became a cynosure of eyes as he sat quietly, taking in the atmospherics and the nuances of the idyllic setting. He would later titillate them in good measures during his opening address as chair of the occasion.
All through the event, as he is wont to do, he carried himself well. The natural, unobtrusive swagger, with his gravitas, was accentuated by his sartorial elegance. Although, he did not don his characteristic royal Benin regalia on this occasion, the beads were writ large on his simple top (buba) and a pair of trousers (soro).
There is no doubt that Obahiagbon knows what he wants; and, having kept his eyes sharply focused on the ball, with accolades pouring in, he is very well content and dancing to the rhythm of his soul. To be clear, that is setting targets and meeting them. He once said that, while growing up, he determined to be popular and great in life; and, he set out to find out how to accomplish that.
His impressionable mind would later be affected by some inspirational lines that he stumbled on.  The lines recommended book reading and search for knowledge as a sure path to greatness and popularity. Pronto! He turned himself into a voracious reader, burning the midnight oil.
A man who has deliberately put his nose to the grindstone to chart a trajectory in life and, also, to define his eon by the magnitude of his profound mind cannot be said to be unserious because it is not an easy task to accomplish in a society where reading culture is poor.  Besides, it is one thing to read and it is another thing to deploy the benefits to utilitarian modes.
Employing the facility of English language, sometimes with a blend of Latinate expressions, to convey messages in a most profound manner is an exertion only for the highly fecund to appropriate and indulge in.  This has become the forte of Obahiagbon, who once told me that he studies all versions of the English dictionary at his disposal for at least one hour on a daily basis. Such discipline is rare.
To whimsically dismiss such sublime disposition as comical performance could only have happened in the political space in a bid by the other camp to further an unconscionable resort to jejune and iniquitous de-marketing of Obahiagbon who is contesting February 16, 2019 Senatorial election in Edo South on the platform of the All Progressives Congress (APC).
He goes into the contest adequately prepared.  With twelve years of legislative practice in his kitty -eight in the Edo State House of Assembly and four in the House of Representatives- Obahiagbon is well experienced and qualified as a ranking legislator if experience and ranking are what his people in Edo South Senatorial District want from whoever would be voted to occupy the senate seat in Abuja.

If vocal voice, which cannot but be listened to, is the requirement, then Obahiagbon’s stentorian voice is capacitated enough to endear elements in the National Assembly and the Executive to him. Such affection could translate into some positives in terms of approvals for projects in the zone that will be salutary to the people’s wellbeing.
Promoting imbalance in the projection of Obahiagbon on a scale that is lower than the man he seeks to dislodge in the race for the Edo South Senate is an unkind enterprise.  Without denying anybody’s achievements, Obahiagbon’s traducers have discounted their own electioneering strategy by deliberately failing to point out that, while in the House, he also executed a number of projects in his Oredo Federal Constituency.
Therefore, if performance is what his people are looking for, Obahiagbon performed creditably in and out of the House of Representatives. His contributions to debates on motions and bills on the floor were deep and robust.  Even though, they are not within the remit of legislative mandate, Obahiagbon also constructed a number of school buildings and roads.
Remarkably, he attracted solar street lights to his constituency; assisted constituents to get employment into the civil service and attracted empowerment programmes for youths and women. He was also responsible for providing youths in the constituency with motorcycles and women with grinding and sewing machines as parts of their democracy dividends.
By and large, the swanky politician cannot be denied his sense of humanity. No amount of stratagem and propaganda can diminish his essence and politics. A politician with a grassroots appeal, his pro-people disposition has become more sharpened by a combination of his luminous epochs as a legislator and chief of staff to the former Governor of Edo State, Comrade Adams Oshiomhole.
To cap it all, that frontiers have been expanded by becoming a positive rallying point of sorts via his profound interventions in the media especially the new and digital media where he shares the same passions and operates on the same wavelength with the millennials and those who were born within three years after 1994 who are now 18 years and qualified to register to vote.
Now, it is significant that his electioneering catch phrases speak volumes about the direction he seeks to emphasise this time round as senator: such catch phrases as “A vote for Obahiagbon  is a vote for the voiceless”, “Obahiagbon: The voice of the people”, “Obahiagbon: The man of the people”, et al, have been carefully couched and crafted to strengthen the promise of acquaintance between him and the people in the unfolding political cum social contract.
Then consider these undeniable lines: “Do you want a vibrant and articulate legislator to represent you in the Senate? If yes, vote Patrick Obahiagbon for Edo South Senatorial District seat.”  He is a lawyer and, in the legal parlance, they say res ipsa loquitur, meaning the fact of the lines speaks for itself.
Indeed, the inimitable master of bombast, the medium through which he has transmogrified into and become a veritable bugaboo to his lazy traducers who indulge in “peppersouping, bigstouting, facebooking, instagraming, whatsapping”, et al, while he continues to exert himself intellectually, is sure-footed and single-minded to clinch victory in the forthcoming election.
Going into the battle on APC’s political platform from where he has been reaching out to the teaming youth population, women, farmers, artisans and the elite with his programmes is a solid advantage, with Edo State being predominantly controlled by the governing party. However, beyond the strategic nature of the political party platform, Obahiagbon is a good material. He can deliver if voted into the Senate.

The Reconstruction of Obahiagbon in the Senate Race
Share
Subscribe to our newsletter
Sign up here to get the latest news, updates and special offers delivered directly to your inbox.
You can unsubscribe at any time