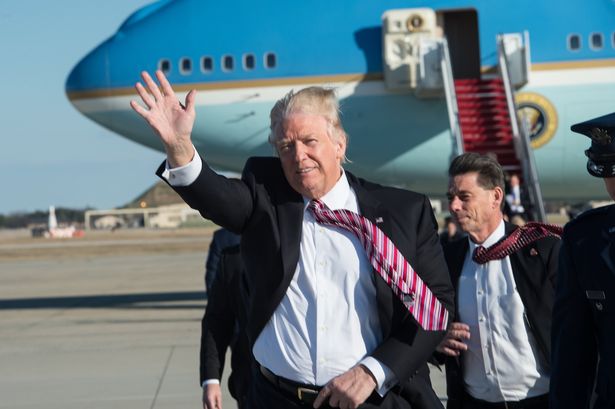 ABOARD AIR FORCE ONE – President Donald Trump on Monday questioned the account Saudi officials have given him about the death of journalist Jamal Khashoggi but said he still believed it was “a plot gone awry.” In an exclusive interview with USA TODAY, he indicated he would oppose efforts to cease arms sales to the kingdom in response.

There are “many other” potential penalties, he said, saying he would be guided by consultations with key members of Congress in settling on the appropriate response, likening it to the discussions he had with Senate Republicans during the Supreme Court confirmation battle over Brett Kavanaugh.

In characterizing the Khashoggi incident as a “plot gone awry,” Trump indicated that he thought the journalist wasn’t deliberately lured into the consulate to be murdered. Saudi officials last week said Khashoggi’s death followed a “brawl” inside the building, an explanation that drew skepticism from some on Capitol Hill.

Trump questioned the validity of at least one detail that has emerged from the incident. Turkish officials have said Khashoggi’s body was cut up with a bone saw. Asked about that detail as a possible indication of wrongdoing, Trump sounded incredulous.

“Do you know there was a bone saw?” he replied.

Trump was expansive during an interview in his office aboard Air Force One as he flew to a rally in Houston for Texas Sen. Ted Cruz, in a surprisingly competitive race for re-election. Occasionally watching himself on a wall-mounted TV tuned to Fox News, he expressed optimism about the midterm elections and discussed his agenda when the new Congress takes over.

Trump said he had talked on the phone with both Saudi Crown Prince Mohammad bin Salman and Turkish President Recep Tayyip Erdogan and that more details about what happened inside the Saudi Consulate in Turkey would be known within a day or two.

“He says he is not involved nor is the king,” Trump said of the Saudi crown prince, declining to answer whether he believed his denials. If their involvement was proven, “I would be very upset about it. We’ll have to see.”

He called the killing of Khashoggi, a journalist and columnist for The Washington Post, “foolish and stupid.”

But he said billions of dollars in U.S. arms sales to the Saudis were an economic boon to Americans and a transaction that Russian and Chinese companies would be delighted to make, if the United States ended them. “We have a very big picture we have to keep in mind,” he said, noting also Saudi Arabia’s role in countering Iran’s influence in the Middle East.

Critics, including some Republicans, have questioned the Trump’s administration’s response to what has become a global diplomatic crisis between the U.S. and a close ally in the Middle East. Some have suggested the incident could not have occurred without Salman’s knowledge.

Trump has vacillated between criticizing a rush to judgment over what happened and trying to pacify critics who think he should take a much stronger stance, potentially by imposing sanctions. Before boarding Air Force One, Trump told reporters at the White House that he was “not satisfied” with the Saudi response so far.

President Trump calls Jamal Khashoggi's death 'a plot gone awry'
Share
Subscribe to our newsletter
Sign up here to get the latest news, updates and special offers delivered directly to your inbox.
You can unsubscribe at any time

The “Oshiomhole must go” coalition by Reuben Abati