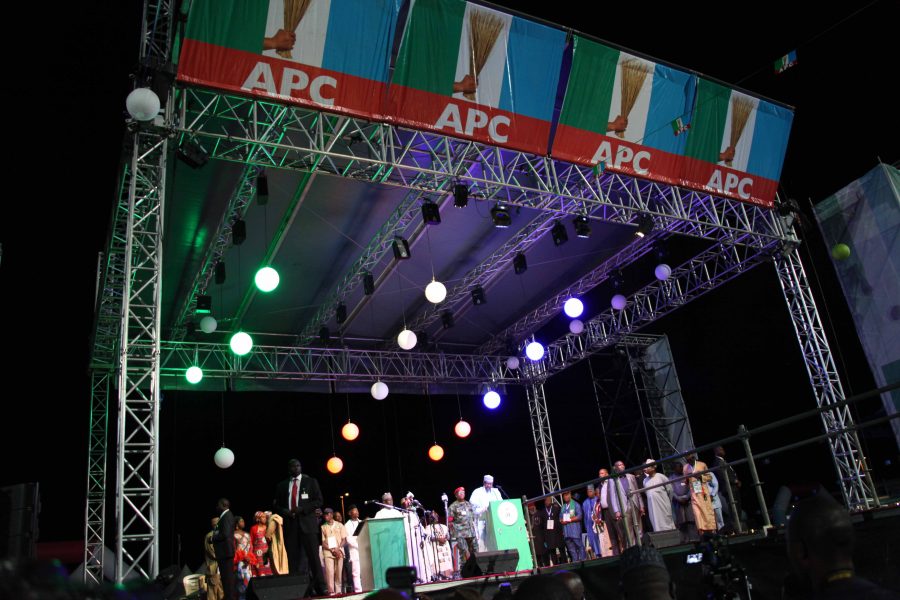 This is not how you win an election.

The disunity that has plagued the ruling All Progressives Congress, APC, throughout the party’s rancorous primaries in different parts of the country has widened the rift amongst party leaders with no fewer than 3 governors threatening to quit the party’s NEC.

The primaries was nasty and loud, and demonstrated again the vast disunity that has plagued the party throughout the process.

Political parties that are this sharply divided rarely prevail. While the opposition Peoples Democratic Party, PDP, are patching up their differences, the APC are still having free-for-alls on the most public of stages.

“History shows that when one party is divided and the other party is united, the divided party almost always loses the presidential election,” said Paul-Henri Gurian, an associate professor of political science at UGA’s School of Public and International Affairs.

We can’t afford to go into the elections as a divided house, said former Acting National Publicity Secretary of the All Progressives Congress, Yekini Nabena, in an interview recently.

APC governors and leaders offered some of their most pointed criticism of their chairman last weekend after he was accused of fueling disunity.

In the span of a month, Adams Oshiomhole has found himself at odds with state leaders as he publicly berated one governor from the North-West and a regional leader from the South South.

These acute tensions with a chairman many party leaders distrust only exacerbate the already deep divisions that have plagued the party for weeks. Now, the disunity is playing out in concrete ways through the APC primaries.

The Aggrieved persons have differently accused Mr. Oshiomhole and some executive officers of the party’s National Working Committee (NWC) of fraud and biases and acting the scripts of certain influential elements in the party.

The aggrieved persons have also cited huge financial inducements in the selections of candidates and warned that if the problem is not addressed they would have no other choice but to step aside from the party NEC, according to Per Second News findings on Monday.

The governors “lamented to president Muhammadu Buhari in a meeting last week that they can not be members of NEC and be treated shabbily by Oshiomhole and noted that it was better for them to be outside the party key structure and be treated like outsiders”.

” Oshiomhole is behaving like People suffering from Alzheimer disease, said a top APC stalwart from Delta state. He is erratic in his behavior, he said.

The Director-General of the Voice of Nigeria, VON, Mr. Osita Okechukwu on Monday also took aim at Oshiomhole, accusing him of promoting impunity.

Okechukwu, who accused Oshiomhole of displaying “I too know attitude”, recalled that the Comrade once boasted that he would not condone disrespect and dishonourable act from anyone.

“Can Comrade Oshiomhole as a matter of urgent national importance clear the air on the culture of impunity and misadventure he demonstrated in Imo State by handing over the APC to a FRIENDLY FAMILY? One challenges Comrade Oshiomhole in all clear conscience to tell the world how APC can win Imo State in 2019 in the CLIFF-HANGER he wittingly or unwittingly railroaded our great party?

Dozens of aggrieved individuals have also given as a condition to remain in the party hierarchy the removal of Mr. Oshiomhole as the party chairman, according to investigations by Bridgenews.com.

Adams Oshiomhole, last night raised the alarm over what he described as a plot against him by unnamed party stakeholders.

He alleged that some high-ranking party stakeholders including some close associates of President Muhammadu Buhari and some unnamed state governors were plotting to remove him.

The APC are in disarray in Imo, Ogun, Adamawa, Delta, Zamfara, Ondo, Edo, and Rivers states.

The “Oshiomhole must go” coalition by Reuben Abati

US takes steps to punish Saudi Arabia over Khashoggi’s killing