Nikki Haley resigns as US ambassador to the United Nations 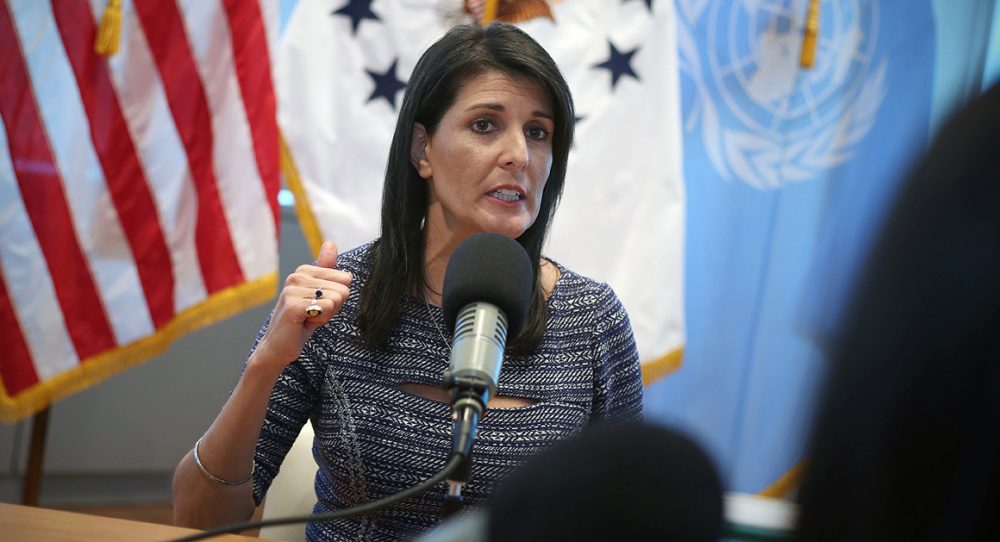 Nikki Haley, U.S. ambassador to the United Nations, is leaving her post at the end of the year, President Trump announced in the Oval Office Tuesday morning. Haley’s replacement is unclear, although Mr. Trump said he will likely select the new ambassador in the next two or three weeks.

Haley told reporters she will not run for office in 2020 and instead campaign for the president, in an attempt to quash speculation that she might chart her own political course challenging him.

“I will say this for all of you that are going to ask about 2020 — no, I am not running for 2020,” the ambassador told reporters. “I can promise you what I will be doing is campaigning for this one. So I look forward to supporting the president in the next election.”

Mr. Trump, meeting with Haley in the Oval Office, informed reporters Tuesday Haley had told him about six months ago that she wanted a break. The president said Haley has been “very special” to him, they hate to lose her, and the two will be in constant touch. Mr. Trump said hopefully Haley can come back to his administration in the future, adding, “You can have your pick.”

Oct 5, 2022
October 3, 2018
Dear Mr. President:
It has been an immense honor to serve our country in your Administration. I cannot thank you enough for giving me this opportunity.
You will recall that when you offered me the position of United States Ambassador to the United Nations in November 2016, I accepted the offer based on some conditions. Those conditions included serving in your Cabinet and on the National Security Council and being free to speak my mind on the issues of the day. You made those commitments and you have absolutely kept them all. For that too, I will always be grateful.
We achieved great successes at the UN. We passed the toughest sanctions against any country in a generation, pressuring North Korea toward denuclearization. We passed an arms embargo on South Sudan that will help reduce violence and hopefully bring peace to that troubled country. We stood up for our ally Israel and began to roll back the UN’s relentless bias against her. We reformed UN operations and saved over $1.3 billion. We spoke out resolutely against dictatorships in Iran, Syria, Venezuela, Cuba, and yes, Russia. Through it all, we stood strong for American values and interests, always placing America first. I am proud of our record.
As a strong supporter of term limits, I have long believed that rotation in office benefits the public. Between the UN Ambassadorship and serving in the South Carolina Governorship and General Assembly, I have been in public office for fourteen straight years. As a businessman, I expect you will appreciate my sense that returning from government to the private sector is not a step down but a step up.
Accordingly, I am resigning my position. To give you time to select a replacement, and to give the Senate time to consider your selection, I am prepared to continue to serve until January 2019.
At that point, I will once again become a private citizen. I expect to continue to speak out from time to time on important public policy matters, but I will surely not be a candidate for any office in 2020. As a private citizen, I look forward to supporting your re-election as President, and supporting the policies that will continue to move our great country toward even greater heights.
With best wishes and deep gratitude,
Nikki Haley
Nikki Haley
Share
Subscribe to our newsletter
Sign up here to get the latest news, updates and special offers delivered directly to your inbox.
You can unsubscribe at any time

My take on Atiku’s choice of a running mate