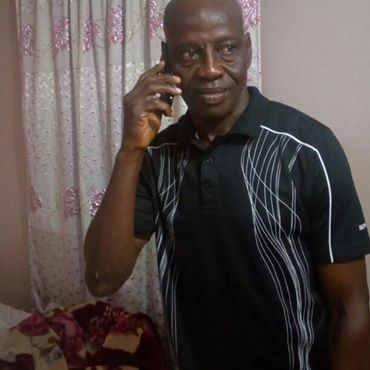 The Ajegunle born player died after a brief illness, Per Second News gathered from associates.

Football is a game full of beauty. Wonder goals, slick passing, miraculous saves, mesmerizing dribbles and skill moves—poetry in motion if there was in sport. Not all players, however, approach the game with such care and respect. For Collins Ebitimi, rough pragmatism and sheer debauchery rule. Simply getting the job done takes precedence over aesthetics,—until someone gets hurt of course.

Collins, who was fondly called `barbwire` for his uncompromising style of play in his playing days, was a member of the golden years of the darling Lagos football club in the early 90’s.

The team won the league title in 1992 with Arthur Moses emerging as the top scorer. They however lost in the semi-final of the 1993 Champions cup to Zamalek.

He was a hard tackling and aggressive defender feared by strikers across the Nigerian football league.

Barbwire as he was fondly called obtained a notorious reputation in football circles for being a tough-tackling defender who loves a good foul.

In Barbwire’s world brutalism and physicality are valued over things like passing and more passing.

The soft spoken player is a different person off the field with friends saying he has a pleasant personality.

” He was very aggressive, I remember playing with him when he came to ilorin for trials with Kwara Utd, he was brutal with everybody, said a friend.  ” That was the first time I met him….after that we played allstars at the  National Stadium for sometime…I must say he has a good personality if you really get to know him

” He has a good personality off-field, said another fellow player. ” But he is “igbobi” on the field. Very aggressive and hard-tackling defender…..Even in training, he would not mind to take away your legs.

Fans and friends are writing farewell messages on the deceased Facebook page.

Don Kefe  wrote, ” Rip to a veterant and friend of the allstars family. Only God knows where the bell will toll next, but we pray its far inbetween till very ripe ages.

” Barbwire sure deserve a solemn moment of respect and morning by the collective allstars family and football fraternity. My condolence to his family and everyone of us. God knows best.”

Collins 'Barbwire' EbitimiEx- Stationery Stores Football Player Dead
Share
Subscribe to our newsletter
Sign up here to get the latest news, updates and special offers delivered directly to your inbox.
You can unsubscribe at any time