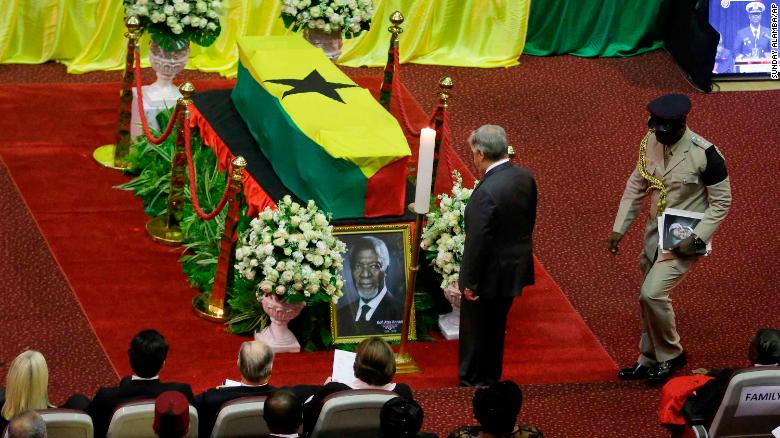 Current U.N. Secretary-General Antonio Guterres, center, pays his respects by the coffin of former U.N. Secretary-General Kofi Annan, draped with the Ghana flag, during a state funeral at the Accra International Conference Center in Ghana Thursday, Sept. 13, 2018. After days of lying in state for mourners to pay their respects the body of Kofi Annan, who died in August in Switzerland at age 80, will be buried Thursday after a final funeral ceremony. (AP Photo/Sunday Alamba)

Kofi Annan, the former UN secretary-general and Nobel Peace Prize winner, has been laid to rest Thursday in his home country of Ghana.

Thousands of mourners gathered in the Accra International Conference Center to pay their last respects during an emotional funeral service on Thursday.

Ghana’s President Nana Dankwa Akufo-Addo said Annan was bold and never gave up on what he believed in.

“Despite the unjustified attacks on him, trying to fix him with responsibility for the genocides in Rwanda and Srebrenica when he was head of U.N. peace operations, he never lost his moral compass, as he showed when he stood up to the might of the United States of America when she was embarking on the ill-fated intervention in Iraq.”

History has vindicated Annan, said Akufo-Addo, saying that his “epic but unavailing effort to establish the supremacy of international law over the actions of even the world’s greatest power won him the admiration of all right-thinking persons.”

He said, Kofi Annan was an ardent believer in the capacity of Ghana and the continent of Africa to chart its own path of progress.

Annan’s wife, Nane “thanked God for giving her such an extraordinary human being,” while his daughter Ama Annan Adedeji said her father “was one of the most loving people l have known.”

Mourners have thronged to the conference center in Accra, where his coffin has been since his body arrived Monday, and where the funeral was held.

A private burial follows at Accra’s Military Cemetery, with full military honors and a 17-gun salute. 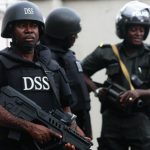