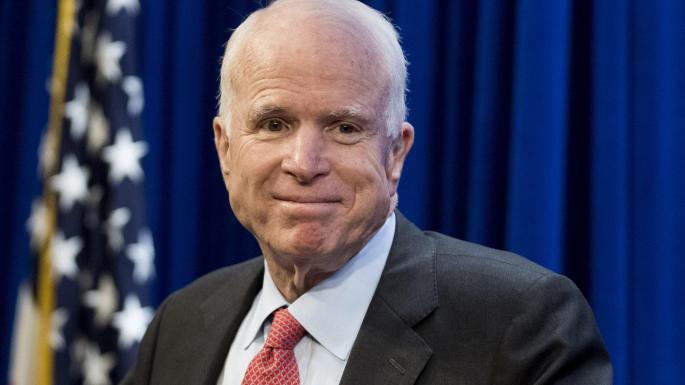 U.S Senator John McCain, the iconic Republican senator, two-time presidential candidate, decorated Naval bomber pilot, and former prisoner of war in Vietnam, died at his Cornville, Arizona home surrounded by his family late Saturday afternoon after a battle with brain cancer. He was 81, and is survived by his second wife Cindy and seven children, including The Viewco-host Meghan McCain. His family had announced on Friday that he would discontinue his medical treatment, but it was not clear how much longer he would live.

McCain, the son and grandson of four-star U.S. Navy admirals, was born at a Naval airbase in the Panama Canal Zone in 1936. He eventually followed his family line into the military and became a Naval aviator after graduating from the U.S. Naval Academy. He later went on to fly combat missions during the Vietnam War, where he earned two medals before being shot down and captured in 1967. McCain spent the next five and a half years in North Vietnamese prison camps, where he endured severe torture, routine beatings, and was at first denied medical care despite receiving multiple injuries in his crash and at the hands of his initial captors (who stabbed him and crushed his shoulder with a rifle butt).

McCain somehow survived his brutal first several months as a P.O.W. and was offered repatriation in 1968, on account of his famous father, but refused to leave unless every other American prisoner captured before him was freed first. He was not released until 1973, and his wartime injuries left him disabled and unable to lift his arms above his shoulders for the rest of his life.

Back in the U.S., McCain eventually decided to leave the Navy in 1981, but not before getting a taste of politics as the Navy’s Senate liaison for a time. Believing he could accomplish more as a member of Congress, the celebrity war hero and new Arizona resident was elected to the House in 1982, serving two terms before successfully running for the Senate. McCain would go on to serve all the remaining years of his life as a senator and develop a reputation as a conservative “maverick” on account of his tendency to challenge other Republicans and conservatives, as well as his personal stands on issues like immigration reform, bipartisan cooperation, and most famously, campaign finance reform. The most important legislative accomplishment of McCain’s career was the campaign finance reform bill he co-authored with Democrat Russ Feingold. It was eventually signed into law as the Bipartisan Campaign Reform Act in 2002.

McCain served on the Senate Armed Services Committee for his entire time in the Senate, and was made its chairman in 1997. He was an ardent supporter and occasional critic of the military across his career. He also earned a sometimes notorious reputation as a hawk on foreign policy, particularly in relation to American adversaries like Russia and Iran — which he once joked about bombing to the tune of a Beach Boys song. McCain supported, and sometimes advocated for, most U.S. wars and military interventions, including the disastrous Iraq War, which he continued to back even after it became widely seen as a failure

Sep 24, 2022
Dead at 81 after battle with brain cancerU.S Senator John McCain
Share
Subscribe to our newsletter
Sign up here to get the latest news, updates and special offers delivered directly to your inbox.
You can unsubscribe at any time