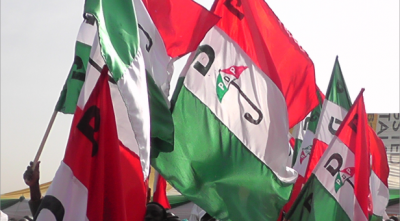 Abuja – The Peoples Democratic Party (PDP) Good Governance Group on Friday said it is not yet time for jubilation until Nigeria’s democracy is rescued from the tyrannical route that the All progressives Congress (APC) has taken.

The group said this formed the reason for the ongoing mass defection of progressives from the ruling APC to the PDP which is still work-in-progress towards rescuing the nation’s nascent democracy.

It also said recent demeanour from the presidency shows desperation which is dangerous for the nation’s democracy, stressing that there is a need to rescue Nigeria.

The PDP group also said that the nation’s democracy is in danger thus the need to sincerely request support from fellow compatriots and the International community to salvage it from total destruction.
It said the body-language of President Muhammadu Buhari should display maturity and integrity by making the electoral body an independent umpire come 2019 and importantly accepts defeat just as former President Goodluck Ebele Jonathan did in 2015.

The PDP group specifically wants the Inspector-General of Police (IGP), Ibrahim Idris to be cautioned by President Buhari over his new found hobby of harassing perceived enemies and prospective opposition in solidarity with the ruling APC as was witnessed on Tuesday, July 24, 2018 when the entire leadership of the National Assembly   was caged and their human rights violated in the full glare of the public.

Addressing a press conference in Abuja, the National Secretary of the Group, Dr Mohammed Nanven Gorelle said the action of the police threw the whole legislature and by extension the country into a huge humiliation before the world.

Gorelle said that our law-enforcement agencies must be neutral and independent, adding that the constitutional role and duty of the Police is to protect lives and properties and not to embolden any political party to harass innocent and law abiding citizens as was witnessed.

The group also declared that the manipulations of the voting process of the July 14, 2018 governorship election in Ekiti state remains unacceptable and must be condemned by all well-meaning Nigerians regardless of their political affiliations.

Gorelle said; “We are witnesses to the report of the independent Election Observers which roundly
condemned the exercise. In view of the former, we are asking for an unbiased operation from INEC and the Nigerian Police against what was witnessed in Ekiti Gubernatorial elections in the forthcoming
elections in Osun state.”

Also speaking, the National coordinator of the PDP Group, Chief Henry Shield called on the international community, Embassies and foreign missions in Nigeria, the Commonwealth Nations, European Union, ECOWAS, AU etc to join Nigerians in condemning human Rights abuses, kidnappings and critically, the killings of our combatants which have received little or no attention from our government.

Shield particularly want the international community to take into account, the incessantdisobedience of court orders on former National Security Adviser (NSA), Col Sambo Dasuki (rtd) and Sheik Ibrahim El-Zakzaky and the perpetual detention of Jones Abiri, the Bayelsa journalist who was arrested in 2016 by the DSS, saying that the case of human rights violation will be instituted against the perpetrators of these acts.

Shield noted that the APC-led government came on a 3-point agenda, namely; Security, Anti-Corruption and Infrastructural Development, saying however that it is evident that in none of the three areas have they taken Nigeria and Nigerians further than they met them in 2015.

He also said; “The propaganda that brought them to power has lost all capacity to help them rule. Nigerians are today, more impoverished, hungry and fear-gripped. Nepotism has become the order of the day as only people related or close to the president are considered fit enough for employments and appointments even if the appointments are beyond their capacity.

“Nigerians are tired. They want to see real developments beyond propaganda and empty promises. What we have today is anti-democracy and a further decay of infrastructure without any holistic attempt to move the nation progressively from where the PDP left Nigeria in 2015 as the 3rd fastest growing economy in the world.

“Indeed, we are in the’ perilous time when cattle are regarded as the ‘Senior Citizens’ of Nigeria. This trend must be halted and immediately too,” he enthused.

Defection: Not Yet Time For Jubilation Until After The Rescue Of Nigeria – PDP Group