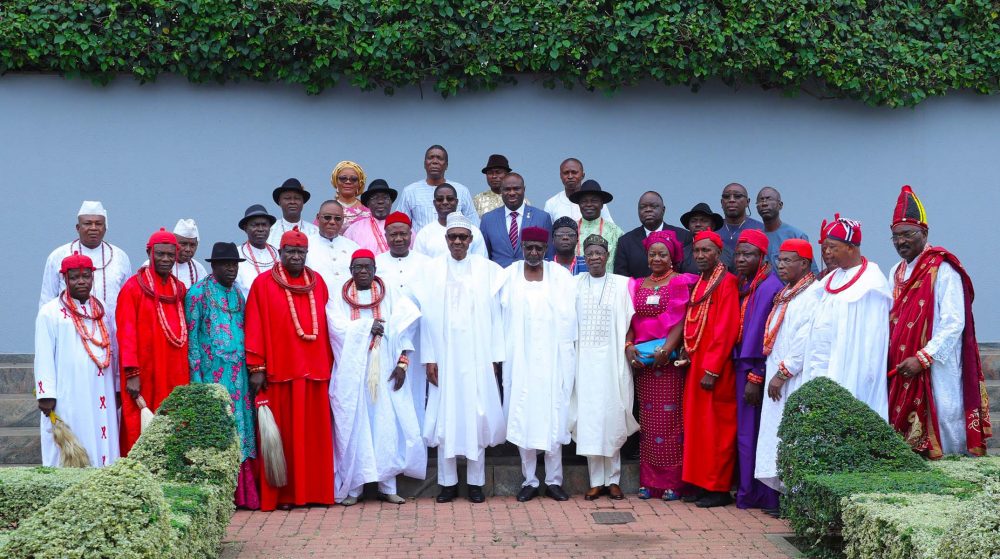 President Muhammadu Buhari Friday in Abuja assured that his administration may look into the constitutional 13 per cent derivation benefit to the Niger Delta region to ensure even spread of developmental projects that meet the needs of the people.

“I will look at the constitutional 13 per cent derivation and what previous governments have done, in order to know what we can do,” Buhari told excited Isoko traditional rulers that came visiting.

“I have listened attentively to your address and I will still update myself with details of development in your area as it relates to oil and gas, and lack of infrastructure, President Buhari told the Isoko Traditional Rulers and personalities led by His Majesty Ovrawah, Omogha 1, Odiologbo of Oleh, at the Presidential Villa.

This is even as the Isoko Traditional Rulers Council have called on the Federal Government to utilize the eight oil fields of flow stations in Isoko land, to establish a gas plant and a modular refinery in the land.

“I will revisit your address and ask for clarification. I will do my best on this issue,” he added.

Buhari noted that the Isoko kingdom had very qualified citizens that have distinguished themselves in various professional and entrepreneurial skills in the country, expressing surprise that the domain was not adequately captured in Federal Government appointments.

Earlier, the President General of the Isoko Development Union and spokesman of the traditional rulers, High Chief Iduh Amadhe, decried the fact that 15 oil wells in the Isoko section of OML 28 has been locked up since November 29, 2011 by SPDC, thereby depriving the country of daily production of 19,000 barrels of Crude Oil leading to huge financial loss.

According to monarchs, the modular refinery  will be beneficial not only to the region but for the nation as well, as it will create  jobs, generate income and better the lives of the citizenry.

The traditional rulers reminded the president that the Isoko kingdom became the second place where oil was discovered in 1958 at Uzere immediately after Oloibiri, in present Bayelsa State.

They appealed to government to prevail on the minister of state, petroleum, Ibe Kachikwu to call on the management of NNPC/SPDC to immediately commence production in the Isoko Section of OML 28-Uzere east to increase revenue government and develop the area.

The monarchs also called on the government to direct oil companies operating in their land to create an enabling environment for investors to convert the Gas a Flare to electricity and for the oil existence of a modular refinery.

The traditional rulers also urged the president to direct the ministry if Niger Delta to capture Isoko land in the siting projects, skills acquisition center and other related programme, noting that no meaningful project has been sited in the area since the ministry was created.

The monarchs also demanded the siting of federal institutions, especially a polytechnic in the area as none of the six polytechnics in the state is sited in the area. They specially requested that the State owned Ozoro Polytechnic be converted to a federal polytechnic.

They also want the president to prevail on the NDDC or ministry of Niger Delta to fix the two roads in Isoko land that have been abandoned. The roads are Emede-Oteri-Igbide-Uzere road and Ofagbe-Awa-Iyede Ame-Onogbokor-Umuoru road.

President Buhari assured the royal fathers that the constitutional provisions for Niger Delta development will be carefully studied for inclusiveness, especially in the prioritization of Federal Government projects.