Buhari’s Message to APC : Don’t Despair Over Defection of Members

President Muhammadu Buhari Tuesday expressed confidence that no harm or injury will be done to the party and its aspirations by the movements of politicians and lawmakers to opposition parties.

The president in a statement, delivered pep talks to perceived demoralized supporters, promising to reassess strategy, message and organization in the wake of decamping of some lawmakers.

The president revealed that the ruling APC had done its utmost to stop the defections, and he commended the leadership of the party for relentlessly working for its unity and ensuring success in the upcoming elections.

“As the saying goes, all politics is local. We understand that some of the distinguished and honourable lawmakers have issues with their home states, especially on zoning which bars some of them from seeking another term in their constituencies,” he said.

He noted that none of the defecting federal lawmakers of the All Progressives Congress (APC) had any specific grievances against him or the government he leads; neither did he harbour anything against any of them.

President Buhari assured members of the APC of his total support and urged party faithful not to despair but to see the defections as a seasonal occurrence that happens on election eve.

He also expressed his total commitment to the values of democracy, freedom of choice as well as total willingness to work with all members of the National Assembly, irrespective of their political party, for the benefit of the nation.

The President wished all the decamped members the best in their future undertakings.

Meanwhile, chairman of the APC, Adams Oshiomhole, said that the Tuesday defectors are politicians with no modicum of electoral value. 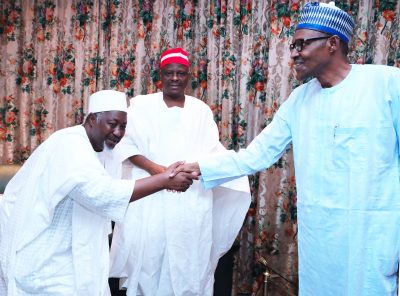 “The thing going on is that you have a lot of so-called big masqueraders with very little and no electoral value, he said after meeting briefly with the President at the Villa.

“This party that I am privileged to chair is not worried at all, we are not disturbed. I am not going to miss my sleep and we will go into the campaign.

“Check the electoral results, you will find that a lot of those who claimed to have defected, on a good day, the votes they got that made them members of the Senate, our President got much more votes in their constituencies. So, we are not fooled at all.

Buhari tell APC members not to despairBuhari's Message to APC : Don't Despair Over Defection of Members
Share
Subscribe to our newsletter
Sign up here to get the latest news, updates and special offers delivered directly to your inbox.
You can unsubscribe at any time