‘I Knew God Was With Us,’ Lionel Messi Says Against Nigeria 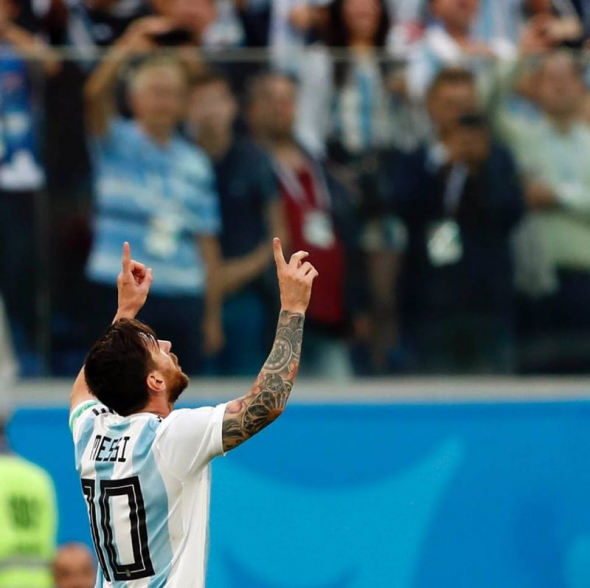 Lionel Messi, the Argentinian forward who also plays for Spanish soccer club Barcelona, said he wasn’t worried because he knew that “God was with us.”

In the 87th minute of the match, Manchester United defender Marcos Rojo scored a dramatic goal putting an end to the nail-biting scenario and sent fans into a frenzied round of celebration.  Argentina walked away with a 2-1 victory.

“I knew that God was with us and would not leave us out [of the competition],” Messi told reporters. “I don’t remember having ever suffered so much, because of the situation and because of what was at stake. It was a huge release for all of us.”

Had Rojo not scored in the 87th minute of the game against Nigeria, Argentina, after a lackluster performance in the competition so far, would have been eliminated from the competition and Nigeria would have reached the Round of 16 for the first time.

“We had been through difficult days because of the result in the previous game, the situation we were in and because of a lot of things that came out. But fortunately we were able to achieve our objective. We knew we would do so. We didn’t expect to suffer so much but we were confident that we would get through. And thank God it happened,” he said.

Things had gotten so bad on the team there were reports that players in the Argentine camp were calling for the resignation of the team’s manager, Jorge Sampaoli. After Tuesday’s victory, however, Messi showed support for Sampaoli, with an embrace.

“He knows the passion I put into everything I do, the journeys I made to talk to him; he knows that we had shared our dream of coming to Russia to do something important for Argentina.

“We have the best player in the world and we have to make the most of that,” Sampaoli added. “My main concern is that Messi has continuity on the pitch: if he has a lot of the ball, then we have chances. If he gets isolated, then Argentina suffer.”

France on Saturday beat Argentina 4-3 sending the Argentines out of the world cup eventually.

Despite their disappointment with the way the match ended, Nigeria, which had the youngest team in the competition, said they were proud of the way they played.

“We showed the world that Nigeria has talented players,” defender Leon Balogun told FIFA . “We showed that we are a footballing nation, and if the team stays together I hope that we can give an even better account of ourselves in four years’ time.”

MessiNigeria
Share
Subscribe to our newsletter
Sign up here to get the latest news, updates and special offers delivered directly to your inbox.
You can unsubscribe at any time

The House of Mourning by Oge Modie