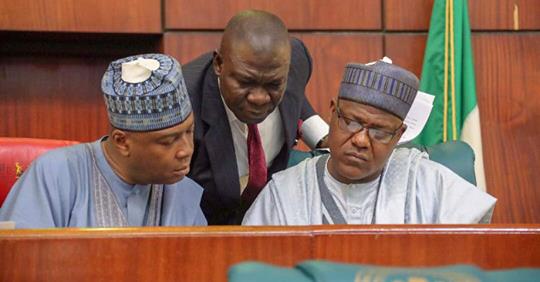 Abuja – The National Assembly on Friday stoutly in defence of its position with regards to the passage of the 2018 Appropriation Bill which was signed into law on Wednesday by President Muhammadu Buhari responded to President Muhammadu Buhari, saying that alteration made were to address geo-political imbalances that came with the Executive proposal.  The leadership of both the Senate and House of Representatives at a press conference explained that the number of projects had to be increased in order to give a sense of belonging to every geo-political zone of the country to ensure socio-economic justice, equity, fairness, and to command National loyalty.

The Federal legislature insisted that it acted within the context of the provisions of Sections 4, 80 and 81 of the Constitution, adding that everything that it did was within its powers.

The press conference which was jointly addressed by the Chairman, Senate Committee on Media & Public Affairs, Senator Aliyu Sabi Abdullahi and that of the House of Reps, Hon Abdulrazak Namdas urged all appointees of the Executive to ensure that they brief Mr. President with the truth and facts of their engagement, to promote healthy and harmonious relationships between the Executive and the Legislature.

The National Assembly explained that the increase in the oil price benchmark from the projected $45 to the actual price of $51 generated additional N523.65 billion for the Federal Government which was allocated among the three arms of government based on agreement between the National Assembly and the Executive as represented by the Ministry of Budget and National Planning.

Commenting on the reduction in the budget of the FCT by N 7.5 billion, the legislators said they stand by the decision owing to the fact that through its oversight of the Federal Capital Territory (FCT), the National Assembly discovered that in the 2016 and 2017 budget cycle, there was a severe non-performance of the budgetary allocations to the FCT.

The two chambers of the National Assembly said that during the two years in question, over 50% of the funds that were allocated and released to the FCT were not utilized and the funds were ultimately returned to the treasury.

According to the National Assembly; “On the provisions for strategic interventions in the health sector which were said to be cut by an aggregate of N7.45billion, it is on record that for the first time since the National Health Act was enacted in 2014, the National Assembly made provision of an additional N55billion for funding primary healthcare through the Basic Primary Healthcare Fund which will be sourced from 1% of the Consolidated Revenue Fund.

“Thus, contrary to the claim that the health sector suffered any budgetary cuts, we actually provided more funds that will make access to health services possible for over 180 million Nigerians.

“The presence of this provision for primary healthcare will help us to eliminate the prevalence of maternal, infant and child mortality as well as create a healthier population. With this increased funding, we will be able to ensure that all Nigerian children get the necessary immunization that keeps various diseases away from them and ensure that mothers are well-catered for during childbirth.

“Furthermore, it was claimed that the provision for Construction of the Terminal Building at Enugu Airport was cut from 2 billion Naira to 500 million Naira and that this will further delay the completion of this critical project.

“However, for the avoidance of doubt, it is necessary to again clarify that during the budget defense and oversight processes, the National Assembly discovered that out of the N2billion contract for the Enugu Terminal Building, N1.7billion had already been paid to the contractor. And what is left to complete this project is just N300million.

“Hence, the National Assembly approved N500million for the project — which is even N200million more than was required. We refer Nigerians to a publication in THISDAY newspaper published in April and titled “Giving Enugu Airport a Facelift” and written by the newspaper’s Aviation correspondent, Chinedu Eze, where the Minister of State (Aviation), Mr. Hadi Sirika was quoted as saying “We just last week released N1.7billion to the contractor and hopefully also, within the shortest possible time, we will release another N300million for him so that they can quickly finish the airport terminal. This will bring the airport to its desired standard.

12 Things You Didn’t See During The 2017 Golden Globes