What Anthony Bourdain said about Lagos 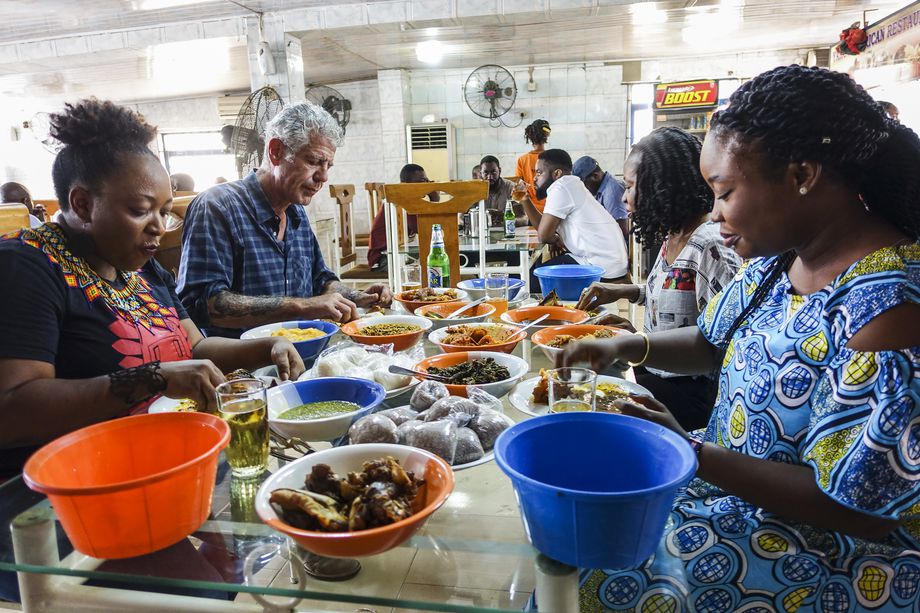 Every Sunday, we live vicariously through Anthony Bourdain’s globe-hopping, face-stuffing adventures on CNN show Parts Unknown. Last October, he was in Lagos, a place where you “buy, sell, trade, hustle and claw,” says Bourdain. “Make your own way, any way you can.”

Bourdain sums up his time in Lagos: “It’s mad, it’s bad, it’s delicious, it’s confusing, and I’ve never seen anything like it.” This  came from the guy who once ate a still-beating cobra heart.

Unsurprisingly, the world acclaimed TV chef ate a little bit of everything, from traditional Hausa dishes like masa griddlecakes to brews with Femi, Seun, and Yeni Kuti, the children of famous singer Fela Kuti.

In Makoko, Bourdain sampled a home-cooked meal while he talked with activist Edoato Agbeniyi and Yomi Messou, son of a neighborhood leader.

On the mainland, he felt the burn while he feasted on pepper soup with journalist Kadaria Ahmed—”It burns. It burns real good.” Other Nigerian eats included pounded yams, Jollof Rice and Egusi soup, stewed with goat meat, melon seeds, fish stock, and chilis.

Anthony Bourdain, was found dead inside his hotel room in Paris, on Friday of apparent suicide, according to the Cable News Network on Friday.

According to a statement obtained by Per Second News from the US Embassy in Paris,  “We can confirm the death of Anthony Bourdain in the Haut-Rhin department of France. We extend our sincere condolences to friends and family. We stand ready to provide appropriate consular service. Out of respect for the family at this difficult time we have no further comment.”

Born in New York City and raised in Leonia, New Jersey, he began his career working in seafood restaurants in Provincetown, Massachusetts — which was said to have sparked his decision to pursue a career in cooking.

From there, he studied at the Culinary Institute of America, where he graduated in 1978.

A long career working in restaurant kitchens in New York City would follow, as a dishwasher, prep drone, line cook, and sous-chef. He served as an executive chef for famed Big Apple establishments One Fifth Avenue, Sullivan’s and the Supper Club. By 1998, he was executive chef at Manhattan’s Brasserie Les Halles.

In his personal life, Bourdain married his high school girlfriend Nancy Putkoski in 1985, the two divorcing in 2005.

In 2017, he began dating Italian actress Asia Argento, 42, after she appeared on an episode of Parts Unknown filmed in her hometown of Rome.

What Anthony Bourdain said about Lagos
Share
Subscribe to our newsletter
Sign up here to get the latest news, updates and special offers delivered directly to your inbox.
You can unsubscribe at any time

Obasanjo raises alarm over plot by Buhari to implicate, arrest him on bogus charges