Mrs Ibidapo, who did not want her real name used so as not to antagonize U.S. embassy officials, said her visa was abruptly revoked by the United States Embassy in Lagos, for no reason after she was invited to the embassy and told to come with her valid US Visa.

” I  have been crying everyday with no-one ready to tell me why my visa was revoked, I have never overstayed in the US  and was there last year,  without any incident, she said.

She is not alone. The number of Nigerians having such visas revoked by the US embassy in Nigeria, has risen sharply in the past months.

Dozens of Nigerians with valid visas trying to obtain a new visa for a spouse, parents or a family member, said the visa applications were denied,  and theirs revoked for no reason.

Majority of Drop box applicants  who are exempted from visa interview during renewal are now being asked to come for interview with most of them being denied visa.

The Interview Waiver Program (IWP), ‘Drop Box’ introduced many years ago in Nigeria,  allows certain Nigerian U.S. visa applicants who are applying to renew a visa in the same class of a visa previously issued by a Consulate/Embassy in Lagos or Abuja, to be considered for a waiver of the visa interview requirement.

In response to Per Second News query about the issue, a U.S State Department Official in Washington, said ” The U.S. Mission to Nigeria has not cancelled the interview waiver process or drop box.’

” When we receive derogatory information that indicates potential visa ineligibility, we take immediate actions such as entering the information in U.S. government databases and revoking visas if appropriate, the official said.

With regard to revocations, the official from the Bureau of Consular Affairs, told this newspaper that Section 222(f) of the Immigration and Nationality Act (INA) prohibits the United States from discussing individual visa cases.

“The Department has broad authority, under Section 221(i) of the Immigration and Nationality Act, to revoke visas based on information that comes to light at any time indicating that a visa holder may be inadmissible to the United States or otherwise ineligible for a visa. ”

A traveller to the United States from the Murtala Mohammed International Airport in Lagos, said he was routinely stopped by Nigerian immigration officials and after series of interrogations told he would not be allowed to travel, except he provides a letter from the US Consulate.

The traveller said he went to the embassy to complain and he was giving an appointment:  “All she asked to look at was my passport,” he said, referring to the US consular official.  “She asked me about two questions, walked away, and returned saying my visa had been revoked. She never gave me a reason why.”

” I was dumbfounded and angry, till date no reason has been given.

Agatha was a holder of a two year multiple visitor visa issued to her in 2017. Since its issuance, Agatha would visit her relatives in Colorado. This year, in June, Agatha is  preparing to attend the graduation of her nephew, who is graduating from the PENN State University in Pennsylvania.

Unfortunately, last month, she claimed she received a notice from the US Embassy Consular Section informing her that her visitor visa is already revoked. She is being asked to go to the US Embassy so they can physically revoke the visa.

One of those letters sent to this newspaper by a woman whose visa was cancelled reads: “New information became available after the visa was issued so that we must re-evaluate your eligibility for the visa. Therefore, you will need to re-apply for a visa and the officer will determine your eligibility at that time. ”

The Department of State through the consular officers is given authority to issue visas to foreign nationals. They are also afforded the discretion to revoke and cancel visas after they have been issued, said an Immigration Attorney based in Nebraska.

“The visa holder’s request for reconsideration of the revocation has been eliminated in 2011 regulations. It also allows the consular officer to revoke the visa without notice if it is “impracticable” to notify the visa holder.

Douglas Ellice, former Border Security Specialist at US Department of Homeland Security (2003-2014), said , ” It sometimes happens that it is discovered AFTER a visa is put into a traveler’s passport that the person is ineligible for the visa and ought no to have received it. An effort will be made, often unsuccessfully, to contact the person before they fly to the USA and ask them return to the embassy for physical cancellation of the visa.”

” DHS data systems will quickly know of the issuance and revocation. If the traveler attempts entry into the USA they will probably be denied admission and sent home, Ellice said.

Per Second News findings indicate that, consular officers are given the authority to revoke visas immediately while considering facts determining grounds for ineligibility.  This is called the “provisional revocation.” Generally, notice of revocation shall be provided to the visa holder but only “if practicable.” This means that even if the visa holder is not yet notified, his visa may be considered revoked provisionally. Whether or not the visa holder is notified, once the revocation is entered into the State Department’s Consular Lookout and Support System (CLASS), the visa is no longer valid for travel.

Femi Olaniyi travelled to Los Angeles on February 21 with a two-year multiple entry visa. He says the experience proved to be an ordeal.
“When I got to the point of entry at Los Angeles Airport, an immigration officer interrogated me.” “He said I should come for biometric (tests) to check whether I have any criminal offence. I told him that I’m not a criminal and that he should go ahead.”
“Later, he brought some documents for me to sign and I told him that I would need to read before I sign. He quickly withdrew the document and put me in a cold cell. From there he held me for four days. He collected all my phones so that I would not get access to my family. He later revoked my visa and sent me back to Nigeria.” 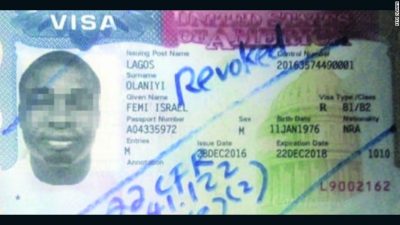 Each year it has become increasingly complicated to obtain visas for some people who are truly deserving. Fraudulent applications as well as abuse in the use of nonimmigrant visas are the reason for the stricted regulations.

In a video released last week by Per Second News, Canadian Immigration officials said a large number of Nigerians who enter the U.S., on tourism visas do end up applying for asylum in Canada through the land border they share with the U.S.

The directives asked American embassies and consulates around the world to identify certain groups that should get extra scrutiny when they apply for visas.

This directive also instructs U.S. posts overseas to review the social media accounts of visa applicants, even if the applicant otherwise qualifies for a visa, those identified as meeting the criteria would require additional scrutiny and possible denial.

Nigeria’s economic and political crisis has spurred one of the largest migration flows in history. The result has been a massive exodus of Nigerians to Libya, Ghana, South Africa, China, India, United Kingdom, United States, Canada, Malaysia, Singapore, EU nations and many more. Independent groups estimate that 1 million to 2 million Nigerians have fled the country in recent years.