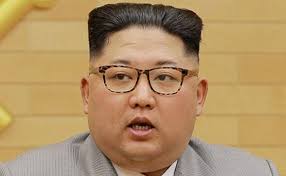 President Donald Trump will not meet with Kim Jong Un in June, according to a letter addressed to the North Korean leader from the president.

The letter was released by White House officials Thursday morning.

Trump wrote that his decision to cancel the planned June 12 meeting came “based on the tremendous anger and open hostility” in a recent statement from North Korea.

In the statement, the North Korean government referred to Vice President Mike Pence as a “political dummy” and said it is just as ready to meet in a nuclear confrontation as at the negotiating table.

“I feel it is inappropriate, at this time, to have this long-planned meeting,” Trump wrote. “Please let this letter serve to represent that the Singapore summit, for the good of both parties but to the detriment of the world, will not take place.”

Trump earlier this month announced that a historic meeting between him and Kim would take place in Singapore on June 12.

Trump cancels meeting with North Korea in a letter to Kim Jong Un
Share
Subscribe to our newsletter
Sign up here to get the latest news, updates and special offers delivered directly to your inbox.
You can unsubscribe at any time

The Day in Pictures: Buhari in Ramadan dinner with Saraki, National Assembly members