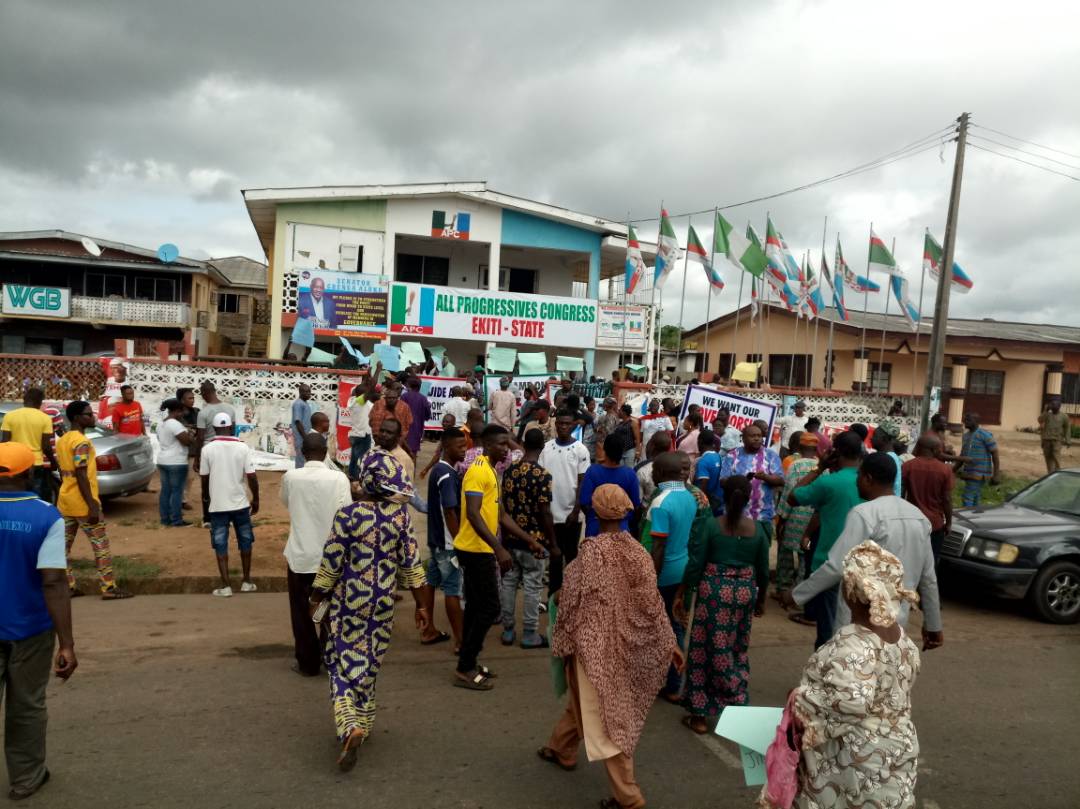 Efforts by the ruling All Progressives Congress-led federal government to make the anti-corruption war a priority, seems not to be working within its own party as the conduct of party members in Ekiti shows a lot still needs to be done to sensitise Nigerians on the malaise.

Investigation by this newspaper reveal that money is a major factor in the Ekiti APC governorship primaries scheduled for Saturday with evidence of delegates moving Friday morning to an hotel in Ado-Ekiti by a contender making it difficult for other competitors to woo them legitimately.

The aspirant Per Second News gathered is being sponsored by a billionaire businessman from the north.

In a bid to win the primary of the All Progressives Congress in the State, investigation conducted by our correspondent revealed that the aspirant is wooing the over 2,000 delegates that would vote in the APC primary with between N400,000 and N700, 000 each.

The hotly contested primary was earlier scheduled to hold today but it has been postponed till May 12, 2018.

An angry delegate said that they are suffering and need money so they want it urgently and would only vote for highest bidder.

The delegates would come from 177 wards across the 16 local government areas of the state.

No fewer than 31 aspirants will be contesting for the ticket of the party at the primary.

“ There is going to be a naira rain on the day of the primary for the delegates because some of the aspirants were ready to woo each delegate with as much as N300,000.

“They know who have been with them a very long time, they know who are with them at the formation of the APC, somebody cannot just come with his money and change their mind, he said.

The Daramola Media office has enjoined all the delegates to be wary of moneybag politicians who might want to buy their votes and after winning the primary, they would become bad product for the party to sell to the people of the state in the governorship election.

Meanwhile, Senator Babafemi Ojudu, has cited the lack of level playing field as one of the reasons he ended his governorship campaign.

More often than not, the biggest spenders do not win elections according to an analysis by Per Second News.

And while spending big bucks didn’t necessarily guarantee victory, not spending enough to at least stay competitive with rival candidates was an almost certain path to defeat, the analysis shows.

“From what has happened since May 5 to date, it goes without saying that this is an unfair contest where the National Working Committee Chairman has clearly demonstrated that he does not care what happens to our dear party now and in the nearest future, said Ojudu on Thursday.

“We saw a Chairman who has conspired with one of the aspirants in the race to unleash mayhem on others, wreck havoc and violence on ordinary citizens and exposed the state to great embarrassment on national television. We saw an aspirant so unpopular to the extent that delegates called him unprintable names at the voting arena now being imposed on our people, not minding if this means we lose this state forever.”

DaramolaEkiti DelegatesOjudu
Share
Subscribe to our newsletter
Sign up here to get the latest news, updates and special offers delivered directly to your inbox.
You can unsubscribe at any time

No resolution in sight in Imo APC stakeholders meeting