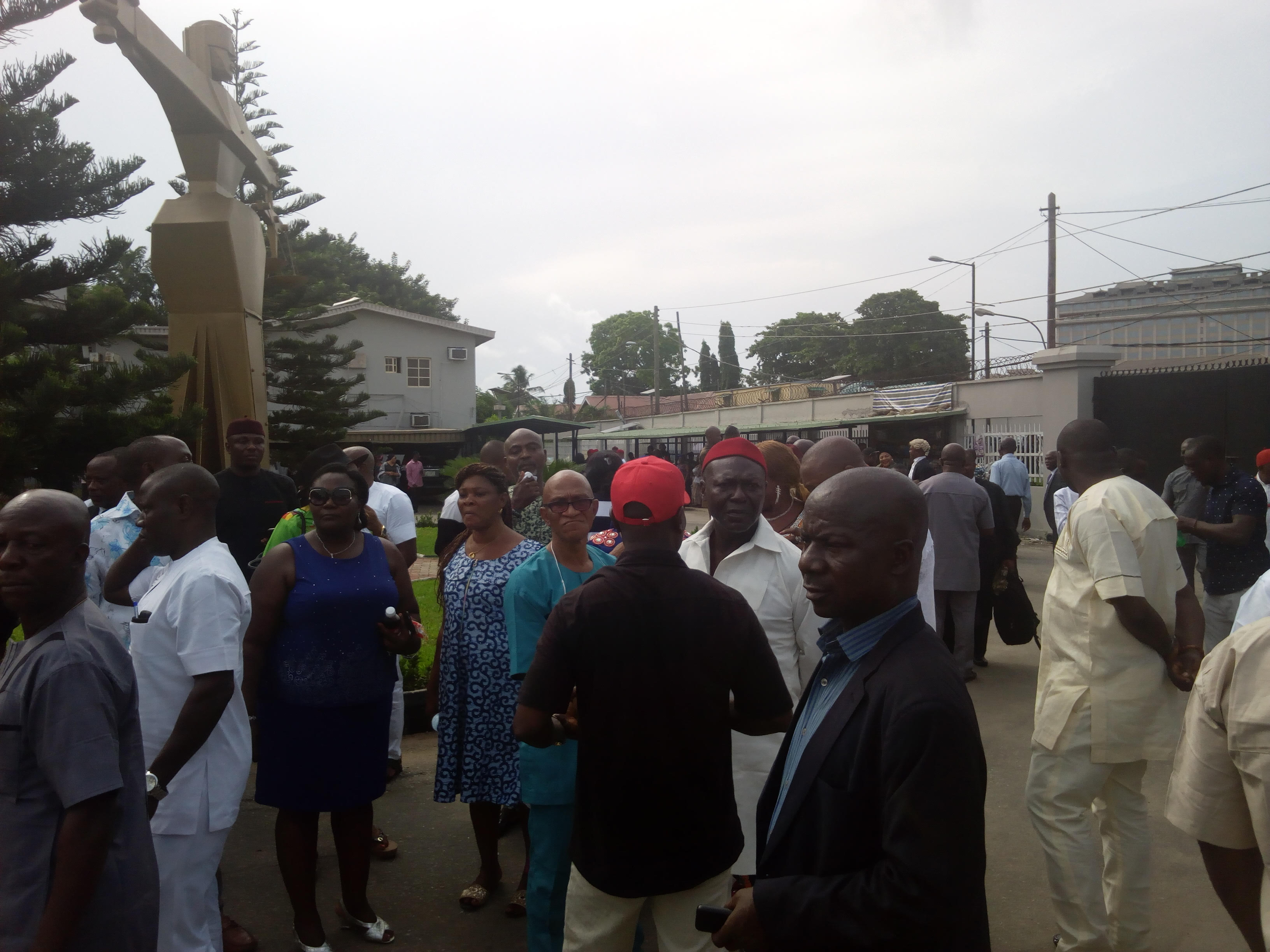 Dozens of supporters of Senator Peter Nwaoboshi on Wednesday stormed the Federal High Court in Lagos in solidarity for the Senator representing Delta state, who was arraigned on two counts charge of money laundering and fraud alongside two companies — Golden Touch Construction Project Ltd and Suiming Electrical Ltd by the Economic and Financial Crimes Commission (EFCC).

Senator Nwaoboshi, entered a plea of `not guilty’.

Just mid-way into his arraignment, the court was rocked by solidarity songs by a large number of supporters, most of who dressed in Igbo/Niger-Delta attire with red caps.

After the `not-guilty’ plea of Nwaoboshi, the prosecutor, Mr M. S. Abubakar, had told the court that in view of their pleas, a date for trial should be given.

But the prosecutor opposed the application and said that the application was not yet ripe for hearing considering the fact that
the commission was served with the motion just yesterday (April 24).

“The prosecution is currently filling its processes at the registry of the court,” he told the court.

Replying, Azinge insisted that the prosecution was served with the application on April 23, but refused service.

She added that the bailiff of the court attempted service at their office but same was refused and the bailiff deposed to an
affidavit of service.

She argued : “The court does not wait for the indolent neither does equity … the charge has been lingering and the defence is
prepared to proceed; the court can stand down the case to enable prosecution file its papers.”

In response, the prosecutor argued that he was not aware that service was refused by the commission.

According to him, from the charge, it is clear that such service ought to have been served at the Abuja office of the commission
and not Lagos.

The prosecutor said even if service was properly effected, same was still not ripe for hearing as the rules provide for two
clear days.

He submitted that the prosecution was also ready to proceed with trial, but said the court could stand down the case, if the
defence so wish.

Justice Mohammed Idris stood down the case until 11.00 a.m. to hear the application.

In the charge, the EFCC alleged that the accused committed the offences between May and June 2014 in Lagos.

Nwaoboshi was said to have acquired a property described as Guinea House, Marine Road, in Apapa Lagos, for the sum of N805 million when he reasonably ought to have known that N322 million out of the purchase sum formed part of proceeds of an unlawful act.

The sum was said to have been transferred to the vendors by order of Suiming Electrical Ltd.

Suiming Electrical was said to have on May 14, 2014, aided Nwaoboshi and Golden Touch to commit money laundering.