Barbara Bush, wife and mother of presidents, dies at 92 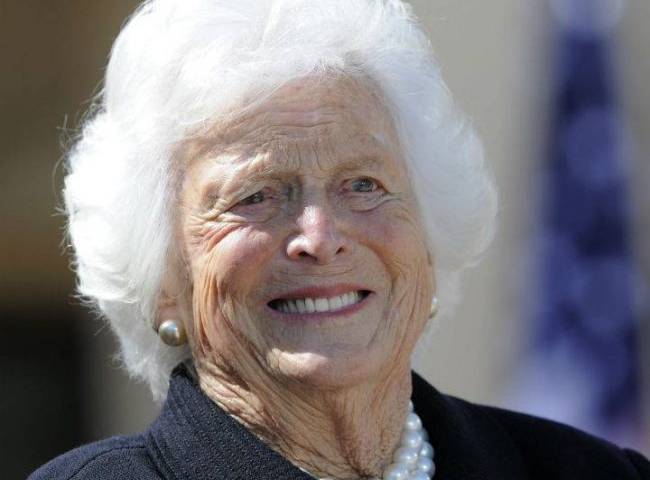 Bush had reportedly been in failing health, and her husband’s office released a statementthis weekend indicating that the former first lady had “decided not to seek additional medical treatment and will focus on comfort care” following a series of recent hospitalizations.

“It will not surprise those who know her that Barbara Bush has been a rock in the face of her failing health, worrying not for herself — thanks to her abiding faith — but for others,” the statement read. “She is surrounded by a family she adores, and appreciates the many kind messages and especially the prayers she is receiving.”

Bush was the widely admired matriarch of one of America’s most famous political families. Barbara and George H.W. Bush had been married for 73 years and are the parents of former President George W. Bush and former Florida Gov. Jeb Bush.

Bush was a passionate literacy advocate, a cause she championed in the White House and throughout her life. “I had the best job in America,” she wrote in a 1994 memoir about her time as first lady. “Every single day was interesting, rewarding, and sometimes just plain fun.”

In a statement, former president George W. Bush said, “Mom kept us on our toes and kept us laughing until the end. I’m a lucky man that Barbara Bush was my mother.”

The news of Bush’s passing was met with an outpouring of remembrances and support for her family.

President Donald Trump and first lady Melania offered their condolences in a statement. The former first lady, the statement read, will be “long remembered for her strong devotion to country and family, both of which she served unfailingly well.”

Barbara Bush
Share
Subscribe to our newsletter
Sign up here to get the latest news, updates and special offers delivered directly to your inbox.
You can unsubscribe at any time