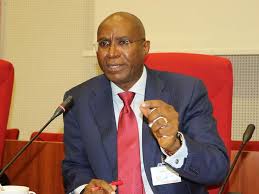 The Senate Committee on Ethics, Privileges and Public Petitions on Thursday afternoon asked for Senator Omo Ovie-Agege, APC, Delta state to be suspended for 181 days over an offensive statement against Senate President Bukola Saraki.

Senator Sam Anyanwu presented the report and read the resolution of the Committee: That Senator Ovie Omo-Agege be suspended to serve as a warning to other Senators and recommended suspension for 181 days.

Omo-Agege who in February offered apology on the floor of the Senate,  last month appealed to the Deputy Senate President Ike Ekweremadu, during a Senate session to help resolve the issue with the committee.

“I urge the Senate to accept apology made by Senator Ovie Omo Agege for offensive statement against Mr. President and warn him to desist from such actions next time without 181 days suspension, said Senator Ahmad Lawan Thursday afternoon.

“I appeal to Senator Dino who took the matter to the Committee and all others who felt slighted to stand down the matter, he begged.

“Senator Ovie Omo Agege’s statement requires much more than an apology, there must be discipline, he must bear the consequences of his actions, said Senator Bala Na’allah.

Confirmed reports said he has been suspended for 90 days.

Omo-Agege with over 8 other senators were opposed to the amendment to section 25 of the Act which re-arranged the order of the 2019 elections.

NigeriaOmo-AgegeSarakiSenate
Share
Subscribe to our newsletter
Sign up here to get the latest news, updates and special offers delivered directly to your inbox.
You can unsubscribe at any time

With entrepreneurship, infrastructure and development concerns again in mind: Elumelu embarks on trip to East Africa

NSE Set to Migrate UBA, Others to Premium Board