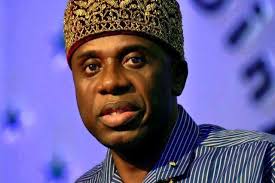 [dropcap]F[/dropcap]ormer social media aide to President Goodluck Jonathan, Reno Omokri, is unloading a barrage of attacks on president Muhammadu Buhari, questioning the fresh list of looters published by the minister of information and culture, Alhaji Lai Mohammed, on Sunday.

“I challenge President Buhari and Lai Mohammed to explain why these men did not feature on their list and why they continue to remain in this APC government where they wield immense powers and influence, even over the Economic and Financial Crimes Commission that is meant to prosecute them.

“I further challenge President Buhari and Lai Mohammed to explain to Nigerians why they failed to reveal to Nigerians that President Buhari himself is a MAJOR beneficiary of the funds that the former National Security Adviser, Colonel Sambo Dasuki, received from the treasury for the security of Nigerians.”

Timipre Sylva: A well known financier and supporter of the APC administration of President Muhammadu Buhari. Alleged to have looted ₦19.7 billion. Was facing trial before Justice A. Y. Mohammed of the Federal High Court, Abuja. However, two days after President Buhari was sworn in, the new APC government WITHDREW the charges preferred against Sylva on June 1, 2015 and on October 3, 2018, the EFCC returned to Sylva, 48 houses seized from him during the administration of former president, Goodluck Jonathan in 2013 to him.

Senator Abdullahi Adamu: Alleged to have looted ₦15 billion with the help of 18 co accused. Charged on March 3, 2010. The case continues to linger in court.

Babachir Lawal: former Secretary to the Government of the Federation. Allegedly gave a ₦200 million contract to his own company from monies meant to look after Internally Displaced Persons. Has been sacked after protest by the opposition and civil society. Has still not been charged. Was allowed to be replaced by his own cousin.

By the omission of these names, the Buhari led Federal Government has vindicated Transparency International.

We have moved 12 places backward from 136 to 148. Yet this administration has the guts to accuse a government under whom Nigeria made her best ever progress on the Corruption Perception Index of corruption? We moved from 144 to 136 in 2014 under President Jonathan because that government fought corruption in court and not through the media.

APCLootersNigeriaPDP
Share
Subscribe to our newsletter
Sign up here to get the latest news, updates and special offers delivered directly to your inbox.
You can unsubscribe at any time

Buhari has failed the test of leadership, says Obasanjo