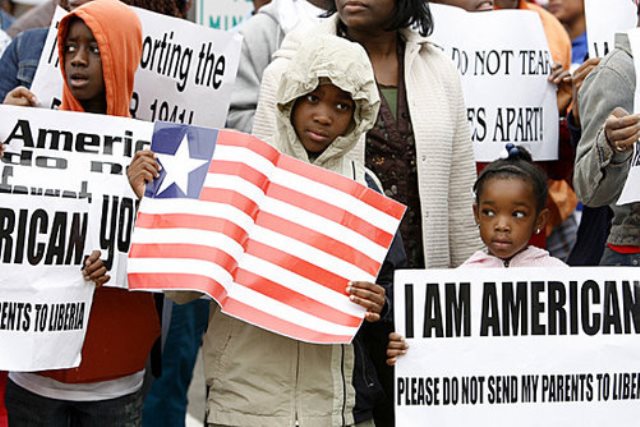 President Trump announced on Tuesday he will end a special immigration program that has allowed nearly 4,000 Liberians to legally live and work in the U.S. over the past 25 years.

Liberians will face whether to leave the country or risk becoming undocumented immigrants facing deportation.

The decision follows the termination of Temporary Protected Status (TPS) for  hundreds of thousands of people from El Salvador, Haiti, Nicaragua, and Sudan. They will have to return to their countries as deadlines for each country approach in the next 18 months.

Liberians were first granted TPS in March 1991 under former President George H.W. Bush due to armed conflicts that were gripping the country. Starting in 1999, Liberians were transferred into a separate program called Deferred Enforced Departure, a classification that allowed them to live and work in the U.S. without fear of deportation.

That status was approved several times by former Presidents Bill Clinton, George W. Bush and Barack Obama as the country grappled with a civil war, ongoing armed conflicts, and an outbreak of the Ebola virus. But on Tuesday, after consulting with the departments of State and Homeland Security, Trump concluded that those conditions had been largely resolved.

Liberians will have 12 months to get their affairs in order and return to their home country.

“I have been informed that conditions in Liberia have improved,” Trump wrote  in a presidential memorandum. “Liberia is no longer experiencing armed conflict and has made significant progress in restoring stability and democratic governance. The 2014 outbreak of Ebola Virus Disease caused a tragic loss of life and economic damage to the country, but Liberia has made tremendous progress in its ability to diagnose and contain future outbreaks of the disease.”

USATODAY
LiberiansTrump
Share
Subscribe to our newsletter
Sign up here to get the latest news, updates and special offers delivered directly to your inbox.
You can unsubscribe at any time