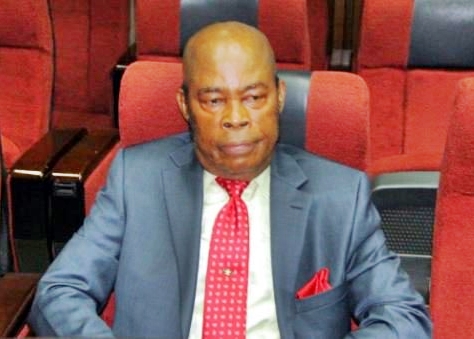 Share
The Federal High Court dealt another major blow to President Muhammadu Buhari’s anti-corruption fight by dismissing all the 13 counts of money laundering and passport fraud instituted against a serving Justice of the Supreme Court, Justice Sylvester Ngwuta.

Trial judge, Justice John Tsoho, dismissed the charges on the grounds that all pre-conditions for instituting charges against a judicial officer were not met before charging Justice Ngwuta.

Justice Ngwuta, in a letter addressed to the Chief Justice of Nigeria (CJN), Justice Mahmud Mohammed, blamed his travails on Amaechi.

In October 18, 2016 letter, Ngwuta traced his ordeal to 2013 when he alleged that Amaechi allegedly approached him at a function at the international Conference Centre (ICC), Abuja, to set aside Ekiti State Governor, Ayo Fayose’s election in order to make way for his (Fayose’s) predecessor, and present Minister of Solid Minerals,  Kayode Fayemi.

His words: “My present plight started sometime between 2013 and 2014. I represented the then CJN in an event organised at the International Conference Centre (ICC).

“Honourable Rotimi Amaechi came in late and sat next to me at the high table. He introduced himself to me and we exchanged contacts. A few weeks later, Fayose’s case was determined in the Court of Appeal.

“Amaechi called me by 6.45am and  said he had come to see me, but was told I had left for my office. When he said he would return in the evening, I demanded to know what he wanted, but he would not tell me.

“He did not come that evening, but came the following morning when I was already prepared to go to work.

“He begged me to ensure Fayose’s election was set aside and another election ordered for his friend, Fayemi, to contest. I told him I would not help him and that even if I was on the panel, I would have only my one vote.

“After the Rivers State governorship election was determined by the Court of Appeal, he called to tell me his ‘ears were full’ and he would like to tell me what he heard.  I told him I was out of Abuja at the time. On my return, he came in the evening and even before he sat down, barked ‘You have seen Wike.’

“I asked him whether that was a question or a statement. Then, he made a call and asked me to speak with someone.
“The man he called said he was a DSS officer. We exchanged greetings and I handed the phone to him. Next, he said, ‘Oga is not happy.’ I asked him who the unhappy ‘Oga’ is and he answered ‘Buhari.’ I retorted ‘go and talk to his wife.’ He got very angry and left, with a remark, ‘we shall see’ several times.”

The Justice added that he was a victim of a resolve not to violate his oath of office.

He continues: “My Noble Lord, I am a victim of my own resolve never to violate my sacred oath of office as a judicial officer.  Politicians and their collaborators have been hunting me on that account. It started in Ebonyi State where I was falsely accused before a panel set up by NJC in August 2000. It was replicated in 2009 when I was pulled from my Calabar Division, to preside over a motion filed by Senator Andy Uba, seeking to be governor without going through the process of election. In each case, I was exonerated.

“Your Lordship may recall one morning, when I pleaded not be on the panel for Rivers state Appeal. Your Lordship said I was already on the panel and asked me to explain why I request to be excluded. When I explained what transpired the previous night, Your Lordship told me Amaechi had also attempted to influence other justices.

“My Lord, on the day we heard the appeal, with your Lordship presiding, we were allowed lunch break at 4.20pm. The moment I got into my Chambers, he, Amaechi, called…  When I saw who was calling, I said, ‘Your Excellency, you want to issue more threats?’  He replied, ‘Have you been threatened before?’  I replied ‘I know a threat when I hear one, even if veiled. In any case, I will not talk to you’ and I switched off my phone.” Justice Ngwuta recalled attempts by some high-ranking politicians to shop for favourable judgement through him.

Ngwuta
Share
Subscribe to our newsletter
Sign up here to get the latest news, updates and special offers delivered directly to your inbox.
You can unsubscribe at any time