We are proud of your achievements, people-oriented projects; APC tells Daramola 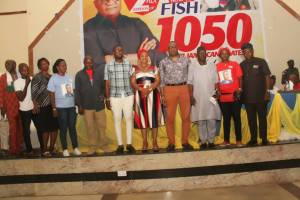 The EKITI State Chapter of the All Progressives Congress, APC, has said it was proud of  Hon Bimbo Daramola’s  legacies and achievements in the state.

“It is beneficial to teach a man to fish than to give him a fish. All the party machineries are here and we are all happy for today’s programme, said the party’s Vice Chairperson, Mrs Kemi Olalere on Tuesday where he again distributed 1,050 free UTME/JAMB forms to indigent students under his Educational Scheme dubbed ‘Teach Them How to Fish’ held at Afe Babalola Foundation Civic Centre, Opopogboro, Ado-Ekiti, the state capital.

“We stand in solidarity with Bimbo because, he is investing in our future leaders. Bimbo is doing all these to promote our great party in this state, she said.

“Parents could not afford the forms for their children because they are suffering at the hands of the state governor who has simply refused to pay them the salaries as and when due. At this juncture, it is important to state that we are not here to adopt or endorse any candidate but to give support to our son and we can all see what is happening here today. When it’s time, the party will speak.

“Let me start from where the Deputy Chairman stopped. She said the party has not adopted anybody, that’s true. But, that is not to say we should not recognise or acknowledge the fact that Hon. Bimbo Daramola has been performing excellently well in this party, said party chieftain, Chief George Ojo, in his remarks.

“When he was in the House of Representatives , I am saying this without mincing words , we knew and know  and recognised all he did for his people in his federal constituency.

Hon. Taiwo Olatunbosun, also praised the former congressman, “As a distinguished party member that respects the party rules and authority, it is equally good to display that; particularly when it’s time to recognise that. You know we have ‘Peter the rock’ somewhere who is mismanaging our resources, but we have ‘Bimbo the dynamite’ who is capable of blasting ‘Peter the rock’ out of Ekiti government house”.

Hon. Bimbo Daramola in his revealed that his intention was to relaunch Ekiti state to an enviable height by restoring the pristine identity of the state.

“We had an alias like one house one professor, but today that’s gone. So, it’s about time to consciously jump start efforts and initiatives  that will connect us with who we really are as a people and initiatives around education particularly fits into that matrix.