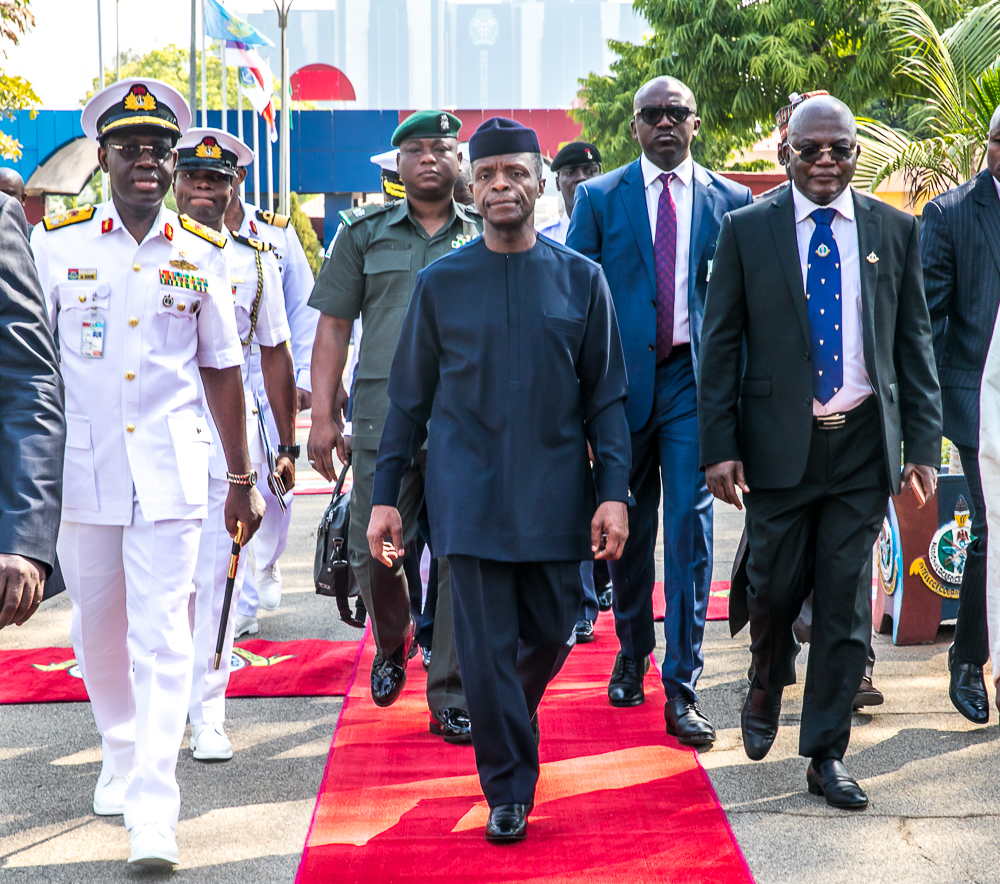 President of Alumni Association of Defence College, Brig. Gen. Jonathan Tamlong, regretted that despite getting early warning on terror attack since 2000, Nigeria was caught napping because government did not act on security report.

“The battles of tomorrow have already begun today. Nigeria is facing multiplicity of threats from mostly non-state actors such as the Boko Haram Terrorist organization, he said at at the opening of the 8th Edition of the National Security Seminar 2018, with the theme: Fighting Tomorrow’s Warfare Today, organised by the Alumni Association of the National Defence College (AABDEC).

“Some of these threats emanated from hostile narratives which are outright hate speeches, high powered politics, religious and communal conflicts, climate change, desertification, herders/farmers crisis, and cyber crimes to mention but a few. We have continued to witnessed changes both in the character of war and the means of violence which include suicide bombers and the context in which they occur. The social media and cyber have also continued to shape the character of war.

“We were at the verge of witnessing such a catastrophic defeat in the recent past. It is sad from our recent experience with Boko Haram at its inception, it was said that our Armed Forces were not prepared for asymmetric warfare. This is despite the fact that Threat Analysis conducted in the early 2000’s along with the MPRI when we were Planning Vision 2020 for the Armed Forces pointed to the contrary.

“In the Threat Analysis, we predicted that the major threat our Armed Forces would face in the future will be asymmetric. The problem was that the document was not adopted and let alone implemented. We were therefore caught napping by not being prepared against an Asymmetric Threat at the onset of the Boko Haram crisis.

“Policy makers may find it difficult to find time and space to engage in strategic thinking and for casting while simultaneously managing current national security challenges and unanticipated crisis. The national security professionals as a matter of routine, would usually consider the future and predict actions required to address current security challenges and prepare for those of tomorrow. Adherence to this ideal goes a long way in projecting the developmental and operational needs of the Armed Forces to adequately cope with emerging threats.”

He added, “Technology is developing at such a speed that we must study to keep track with its anticipated implications on the battlefield. We must be able to rigorously define the military problems we are likely to face in future conflicts. The military must develop a culture of experimentation and taking bold and calculated risks. Nuclear and other weapons of mass destruction are already being proliferated in many nations whose ability to effect our control access to such controlled weapons is sometimes in doubt. Should some of these fall into wrong hands, there would be serious challenges to the survival of generations of people.

“Today, the non-state criminal actors are engaging national armies in asymmetrical warfare. Though they do not have airplanes or nuclear capability yet, they have continued to give the national armies and coalitions tough times, occupying territories, inflicting massive pains and deaths on the populace. At the rate states are failing, armouries being looted and porous borders remain largely unmanned, greater challenges lie ahead. This is noting that criminal groups keep increasing in number and prevalent conditions on a global scale make it so easy for them to recruit members. There is therefore no gainsaying that we must intensity our efforts to deal with the asymmetric warfare of today and prepare to face the emerging more complex trends in tomorrow’s warfare.”

BorderNigeria
Share
Subscribe to our newsletter
Sign up here to get the latest news, updates and special offers delivered directly to your inbox.
You can unsubscribe at any time