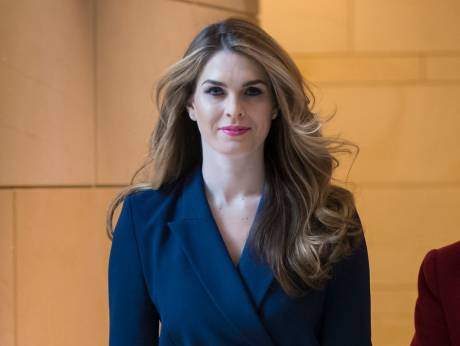 Hope Hicks, one of Donald Trump’s longest-serving aides, is resigning as the US president’s communications director, the White House said Wednesday.

“Hope is outstanding and has done great work for the last three years,” Trump said, in a statement on the departure of perhaps his most trusted aide and confidante, who was a key figure in the Republican’s election campaign before joining him in the White House.

“I will miss having her by my side but when she approached me about pursuing other opportunities, I totally understood,” the president added. “I am sure we will work together again in the future.”

“There are no words to adequately express my gratitude to President Trump,” the 29-year-old Hicks said in a statement of her own.

White House Press Secretary Sarah Sanders said no timeline had been set for Hicks’ departure, and denied any link between her decision and her questioning Tuesday by a congressional panel probing Russian meddling in the 2016 presidential election.

Hicks had cut a discreet figure in the White House since the president took office a year ago — but was brutally thrust into the spotlight in early February when another top Trump aide with whom she had become romantically involved was accused of domestic abuse.