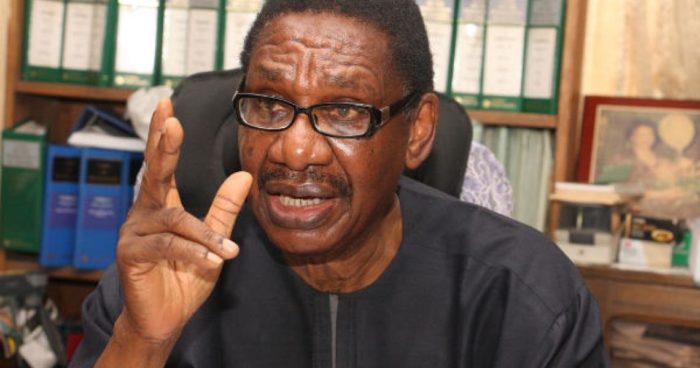 “Fighting corruption cannot be lip service. You cannot be corrupt and be talking against corruption, it ridicules the whole exercise and the spirit of that struggle, he said at the Dialogue of Organs of Government on Reform of Justice Sector and Campaign Against corruption, jointly organized by the Presidential Advisory Committee Against Corruption and Federal Ministry of Justice.

“And so we should purge ourselves of corruption so that we can stand on firm ground to speak. Some might have been corrupt in the past but if you purge yourselves then you are welcome. It ridicules the whole process when we see people waxing lyrical on anti-corruption whereas behind them, they have huge load of assets and other things which they corruptly acquired.

“So, collaboration and cooperation is essential because we need each other in order to succeed. But I think I will rather work alone than work with a corrupt person who is not sincere and is just making a fool of the whole country whilst preaching like a pastor about corruption.”

Earlier, Vice President Yemi Osinbajo, said the latest corruption perception index released by Transparency International should not in anyway be seen as a set back but  opportunity to continue building on the many successes that have already been recorded by the Muhammadu Buhari led administration in all the key sectors.

Represented by the Deputy Chief of Staff, Ade Ipaye, Osinbajo insisted the administration is recording progress in the fight against corruption, noting that perception may indeed lag behind reality.

He said: “This dialogue couldn’t have come at a better time because only recently, Transparency International released a report suggesting that Nigerian declined in the perception index for reasons which I will discuss shortly.

“We are firmly of the view that real progress is being achieved in the fight against corruption in Nigeria, and perception may indeed lag behind reality. But as the saying goes, perception is sometimes stronger than reality, so we have to keep up the good fight, until the full effect of our efforts can be clearly seen and perceived.

“In that regard, the ranking of Nigeria by the 2017 Transparency International Corruption Perception Index, released on February 21st, 2018, should not in anyway be seen as a set back but rather as an opportunity to continue building on the many successes that have already been recorded by this government in all the key sectors.

“So the the drop recorded was in just one out of the nine recognized indexes. The index in question scored Nigeria low on the economy intelligence unit country’s risk service with the decline from 37 points to 20. This is an index that analysis the risks of financial exposure in countries.

“The question to be asked then is what changed so dramatically between 2016 and 2017? As we speak, the budget for 2018 is under public scrutiny at the National Assembly, the allocation and use of public funds is guided by the budget and represents one of the key areas of consultations and interaction between the two arms of government, that is the executive and legislature.

“The endless number of probes and the use of public funds going on both within the executive and the legislative arms, underscores the transparency of this government and its intention to ensure that funds are used for public purposes.

“What sets Buhari’s leadership apart from others, is the prudent and transparent management of national resources. Thus, despite upto 60 percent drop in revenue, we have by stopping grand corruption, make highest capital spend in the history of Nigeria, in the sum of N1.3 trillion in 2017.

“We have for the first time taken on the game changing infrastructure projects. So we are today building the Lagos-Kano standard gauge rail line  beginning with the Lagos Ibadan segment. We are also building after 40 years, the Mambila Hydro Project, construction of the second Niger Bridge is ongoing daily, we have signed up for the Lagos-Calabar rail project, we are daily increasing power supply and once we conclude some strategic transmission project, we will see a truly significant and appreciable improvement in domestic and industrial power supply in Nigeria.

“Also this government has given more to support the state governments than any other government since 1999. As of September2017, total support from excess crude account loan and budget support facility, excluding now the Paris Club refund, is in the order of N873.3 billion. If we add the Paris club refund, we would have disbursed N1.91 trillion to the states outside of their monthly allocations.

Sagay
Share
Subscribe to our newsletter
Sign up here to get the latest news, updates and special offers delivered directly to your inbox.
You can unsubscribe at any time

Dapchi 110: The tragedy of a nation By Reuben Abati

FG sets up committee to probe abduction of Dapchi girls