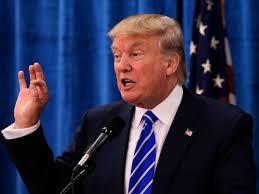 At a White House “listening session” on school shootings Wednesday, President Trump argued that arming teachers and staff was potentially the best way to prevent tragedies such as last week’s massacre at a Florida school in Parkland.

Concealed carry, Trump said, “only works where you have people very adept at using firearms, of which you have many. And it would be teachers and coaches.”

Referring to  Aaron Feis, the assistant football coach and security guard at Marjory Stoneman Douglas High School who was one of 17 people killed in the Parkland shooting, Trump continued: “If the coach had a firearm in his locker when he ran at this guy, that coach was very brave, saved a lot of lives I suspect.”

Trump seems to think the way to solve the problems with school shootings is more guns … specifically, arming teachers.

The head of the school district where 17 people were killed last week pushed back on Wednesday against  Trump’s suggestion that arming teachers could prevent future shootings.

“Some of the dialogue I’ve heard recently is about arming teachers. We don’t need to put guns in the hands of teachers,” Florida’s Broward County superintendent Robert Runcie said, prompting raucous applause from the crowd.

“You know what we need? We need to arm our teachers with more money in their pocket,” he added, speaking on CNN ahead of a televised debate on reform needed to prevent future school shootings.

GunsTeachersUS
Share
Subscribe to our newsletter
Sign up here to get the latest news, updates and special offers delivered directly to your inbox.
You can unsubscribe at any time

Corruption in Nigeria is getting worse, says Transparency International