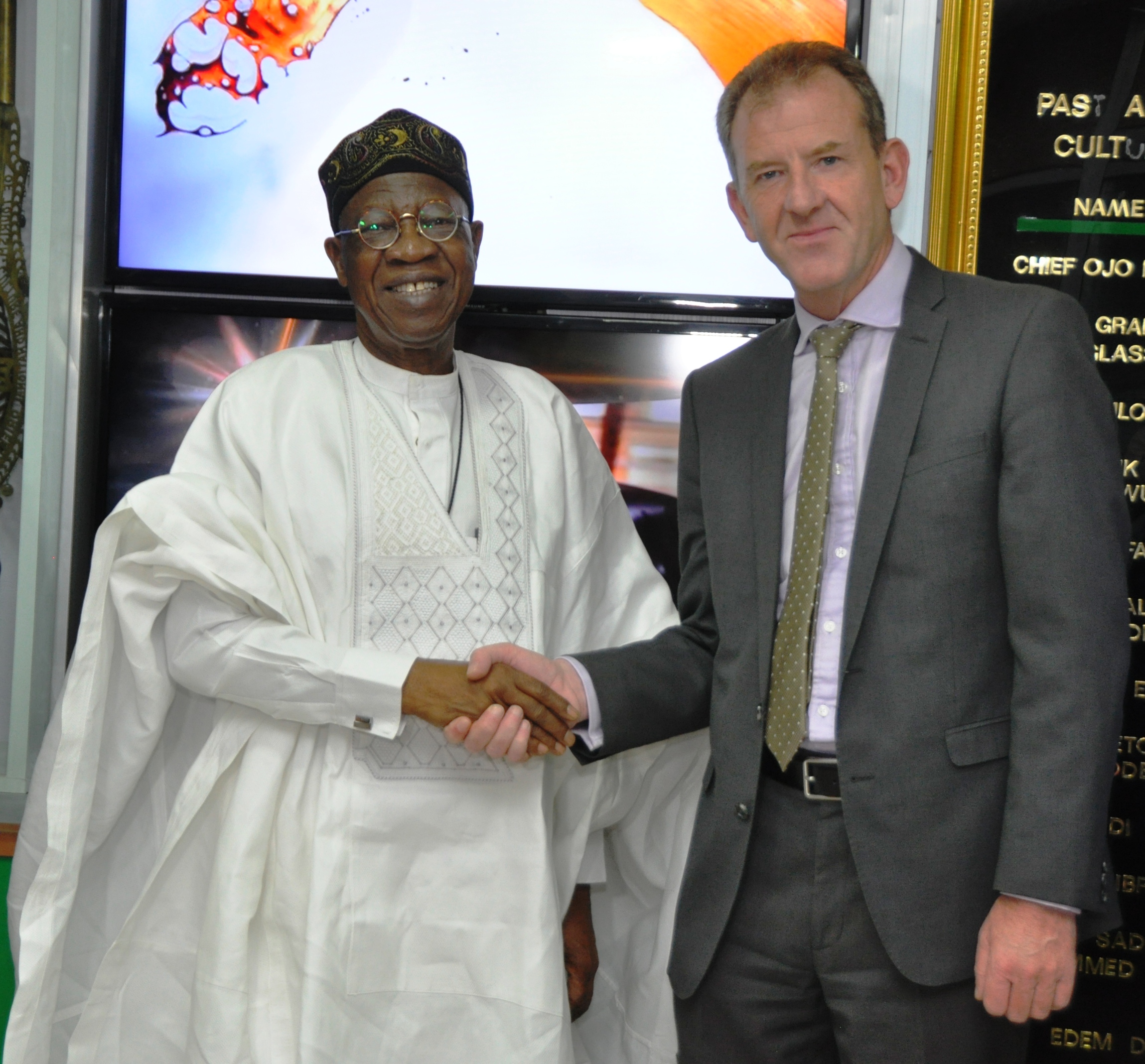 Share
The Minister of Information and Culture, Alhaji Lai Mohammed, has challenged the media to contextualize their reporting so that those who destroyed Nigeria will not be made to look like the country’s new saviours.

The Minister said this when the Chief Executive Officer of TVC Communications, Mr. Andrew Hanlon, led a team of top officials of the company on a courtesy visit to the Minister in his office in Abuja on Tuesday.

”We are on a rescue mission. However, the way a section of the media is reporting the challenges facing the country today does not reflect that understanding. They are making a corrective administration to look like the culprit, to give the impression that the rain started beating us in Nigeria only from 29 May 2015, to play down the challenges that this Administration has faced and which it is successfully tackling.

”For example, we did not get to where we are today in just three years. It has taken successive decades of bad governance, unbridled corruption, lack of probity, a culture of impunity and a near state of anarchy. These are the ills this Administration inherited and which it has set out to tackle. And this is what the media must reflect in their reporting,” he said.

Alhaji Mohammed said but for the prudence, probity and the anti-corruption stance of this Administration, the situation could have been worse, adding: ”Instead of recession, we could have had a total collapse of the economy. The power grid could have collapsed altogether. Corruption could have overwhelmed the society. Boko Haram could have turned Abuja to Bama or Konduga. Food imports could have tripled what it was pre-May 29th 2015 and the Naira might have been worse hit.”

He, therefore, challenged the media to do more to educate Nigerians ”that it is hard to build but easy to destroy, that the same people who presided over yesterday’s looting of our treasury are today posing as would-be saviours of Nigerians, that this Administration is rebuilding almost from the scratch with 60% less revenue, that the corrupt ones are spending millions of Naira to paint the government of the bad, and that Nigeria is not returning to Egypt”.

The Minister said when this Administration assumed office, the price of oil, the mainstay of Nigeria’s economy, had dropped to around $30 from over $100, foreign reserves stood at a low of $24 billion, the Federal Government was borrowing to pay salary, some 27 states were owing arrears of salary, contractors were being owed over several years, infrastructure was in poor state, power generation was 2,690 megawatts, billions were being paid as ‘fuel subsidies’ to fat cats, corruption had emptied the treasury while 20 of the 27 local councils in Borno were under Boko Haram control.

”Today, the trend is being reversed and the results are showing: Foreign Reserves is now $42.8b, inflation has fallen for 12 consecutive months to 15.13%, 108 billion Naira has been saved from the removal of maintenance fees payable to banks pre-TSA, the nation is saving 24.7 billion Naira monthly with the full TSA implementation, the elimination of ghost workers has saved the nation 120 billion Naira, capital inflow reached $1.8 billion in the second quarter of 2017, almost double the $908 million in the first quarter, while Nigeria’s stock market is one of the best-performing in the world, delivering returns in excess of 40 percent.

”Nigeria has also jumped 24 places on the World Bank’s Ease of Doing Business ranking and earned a place on the List of Top 10 Reformers in the world, the Administration has repeatedly given bailouts for states to pay salary, the Administration’s Agricultural Revolution is a huge success, with agriculture export up year-on-year by 25%, rice import from Thailand dropping 644,000 Metric Tonnes to 22,000MT and rice farmers growing from 5 million to 12.3 million, the Home-Grown School Feeding Programme has created jobs for 61,352 cooks, and it is providing 6.4 million school children in 33,981 schools across 20 states with one meal a day,” he said.

Alhaji Mohammed also noted that the N-Power programme has employed 200,000 graduates, that power generation has reached an all-time high of over 7,000MW, that infrastructural development is going on at a massive rate across the country, that corruption has been driven under the table and Boko Haram has been massively degraded.

He said a free press is indispensable to democracy, and assured that the Administration will not do anything to stifle the press  Earlier, Mr. Hanlon had assured the Minister of TVC Communication’s commitment to the country’s audio-visual landscape, while announcing that a new radio station will open in Abuja in April as part of the company’s aggressive investment programme.

Judges, the law and our democracy By Reuben Abati