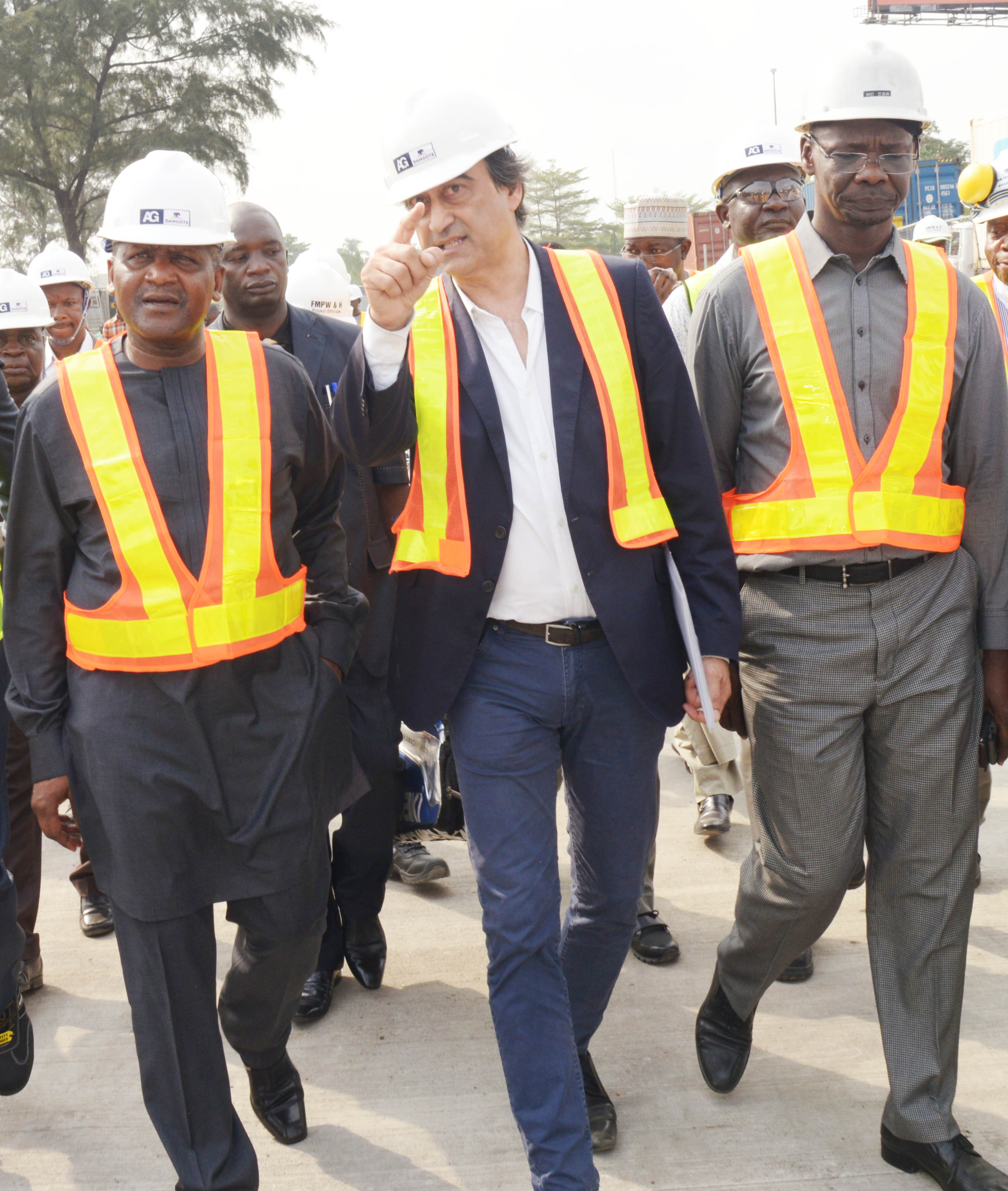 President of Dangote Group, Aliko Dangote has assured that the Apapa Port Wharf concrete road currently under construction by his company, AG Dangote would be delivered on schedule to save the people and businesses the hassles of the traffic gridlock being experienced now.

He gave the assurance yesterday when he visited the construction area in company with the Managing Director of the AG Dangote Construction Company, Mr Ashif Juma to assess the extent of work done.

The Apapa Port road which is the artery of the nation’s non-oil economy, has been in a state of disrepair over a long period of time with experts claiming that the nation is losing about N20 billion daily owing to the state of dilapidation of the road as imports are trapped in the ports for days as a result of traffic gridlock generated by the bad road.

Dangote Group, a pan African Conglomerate and a major stakeholder at the ports brokered a tripartite arrangement with Flour Mills, a leading Nigerian Food Company and Nigerian Port Authority, (NPA), taking over the road from the Federal Government and undertaking the reconstruction of the road into a lasting concrete pavement as part of their Corporate Social Responsibility.

The road construction in which both NPA and Flour Mills have financial outlay as their contributions while AG Dangote Construction, a subsidiary of the Dangote Group, is undertaking the construction, is to cost the three partners N4.3 billion

Dangote said the road will be completed in few months’ time and that Nigerians would be surprised to see the project delivered even before scheduled, saying efforts are being redoubled by his company to ensure quality job and timely completion.

According to him: by the time the road construction is completed, even some of the advanced countries would not be able to boast of the quality.”

He explained that what actually delay the take-off of the project was the gas pipeline that has to be relocated to pave the way for unfettered construction work “and having done that, you could see that the work is progressing at a very fast speed.”

The businessman while relying on the reports of the challenges encountered by the site engineers appealed to the authorities to help see to the disturbing issue of multiple check points being mounted by security agencies and which have been creating long queues of trailers and thus affecting free flow of work on the road project.

He also explained that his company has agreed with the federal government to do some palliatives on the Mile2 expressway road to ease the traffic congestion and ensure free flow of vehicular movement.

Dangote stated that the road was very strategic because Apapa and Tin Can Island ports handle about 80 per cent of the cargo that come into Nigeria and the condition of the road has made nonsense of businesses depending on the ports efficient operations.

He said that he more worried about the fate of small businesses and other port users that have imported cargo and whose charges are accumulating every day.

Mr. Juma took Dangote and his team round the construction area and showed him how they have been following the designs handed over to his company.

Speaking in similar vein, Group Managing Director of Flour Mills, Mr. Paul Gbededo said the three partners have shown how to be good corporate citizens saying by the time the road project is com