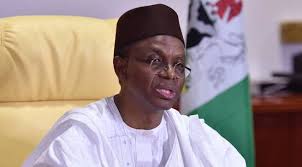 Abuja – The seeming internal wrangling within the Kaduna State chapter of the All Progressives Congress (APC), burst open on Thursday as the State Working Committee of the Party wielded the big stick against Governor Nasir el-Rufai and some of his aides.

The State Party officials did not stop at that as it went ahead to relocate its operating State headquarters to a new address with a view to assert itself and free itself from what it described as the oppressive shackles of Governor el-Rufai and his appointed aides that are desirous of taking total control of the Party and its structures.

Accordingly, the Kaduna APC SWC has slammed Governor el-Rufa’i with a query just as it suspended three of his aides that included the Special Adviser to the governor on Political Matters, Uba Sani; the Commissioner for Finance, Audu Kwari; and the party’s Acting Secretary, Yahaya Baba-Pate. 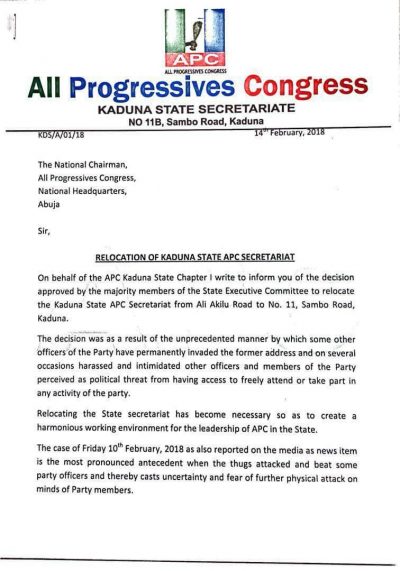 Acting State Chairman of the Party, Danladi Wada said the decision was taken following investigations and wide consultations among elders and stakeholders of the governing party in Kaduna state.

The APC letter to Governor el-Rufai read in part; “Query and warning letter on your activities and actions capable of eroding the confidence of members and followership of the All Progressives Congress and electorates and residents of Kaduna State.”

Consequently, the Party gave the embattled Governor el-Rufai 48 hours to respond to the query or risk further disciplinary actions against him particularly his “anti-party and anti-human activities.”

The statement, which was obtain by Persecond News further stated; “His Excellency, Mallam Nasiru El-Rufai has been queried and we are expecting him to answer the query within 48 hours. Failure to do that, the state working committee will seat down and deliberate.”

“We queried Mallam Nasiru El-Rufai for his anti-party activities and anti-human activities. The Party has therefore given him 48 hours grace period to reply to the query”, the statement added.

The Shuiabu Inuwa Wada-led State APC said the trio were suspended for 18 months owing to their activities considered to be inimical to the interest of the State Chapter of the Party.

The Party leadership explained that Baba Pate was suspended for “always taking unilateral decisions and conclusions and issuance of directives to the Local Government, Ward and individual members of the Party in the guise of the decisions of the State Executive Council of the party or State Working whereas he was only carrying out the biddings of Uba Sani, the Political Adviser to Governor el-Rufai.

He further said; “His actions were adjudged to have compromised the Party’s Constitution thereby disrupting peaceful, lawful and efficient organization of the party in the State.”

The APC leadership in Kaduna further stated that Kwari was “also adjudged to be disobedient and negligent in carrying out lawful directives of the party.”

Commenting on Uba Sani, the Party SWC said he was never a member of party until recently when the Party undertook continuous membership drive, adding that his membership card was only picked up early this year even as he expressed regret that Uba’s activities have inflicted incurable damage to the party, a development that led to his being suspended.

The APC leadership in Kaduna said the suspension of the affected members takes effect from February 12, 2018. .

Governor el-Rufai is believed to be at daggers drawn political battle with Senators Shehu Sani (APC Kaduna Central), Othman Hunkuyi (APC Kaduna North), Danjuma Laáh (PDP Kaduna South) and 12 out of the 14 members of the House of Representatives from the State in the National Assembly.