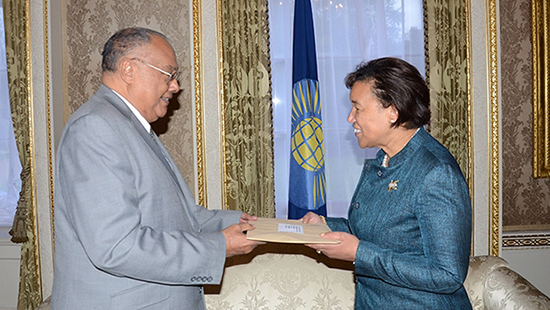 The Gambia rejoins the Commonwealth family Wednesday, almost five years after leaving it.

“When The Gambia left in 2013, the heads of government expressed their regret in its leaving the Commonwealth family. We’ve looked forward to The Gambia’s return and were delighted when, after his election victory last year, President Barrow pledged to return. The Gambia’s application to rejoin has been unanimously accepted by all 52-member states, who welcome back their brothers and sisters to again play their full part in the Commonwealth family, said Secretary-General Scotland in a statement obtained by Per Second News Wednesday.

Last December, the parliament of The Gambia unanimously affirmed the country’s desire to rejoin the Commonwealth, thereby fulfilling one of the final steps in the organisation’s membership process.

Its application was unanimously supported by the current 52-member states and The Gambia will now be invited to attend the Commonwealth Heads of Government Meeting (CHOGM) in April in London.

A flag-raising ceremony, at Marlborough House, the London headquarters of the Commonwealth Secretariat, will mark its return.

Commonwealth Secretary-General Patricia Scotland, the chair of the Executive Committee of the Board of Governors, Norman Hamilton, members of the Committee, and The Gambian high commissioner, Francis Blain, will attend the ceremony.

The decision to begin the process of applying for readmission was made in February 2017 by President Adama Barrow, who came to power following elections in December 2016.

CommonwealthGambia
Share
Subscribe to our newsletter
Sign up here to get the latest news, updates and special offers delivered directly to your inbox.
You can unsubscribe at any time

Of drowning men and national security by Reuben Abati