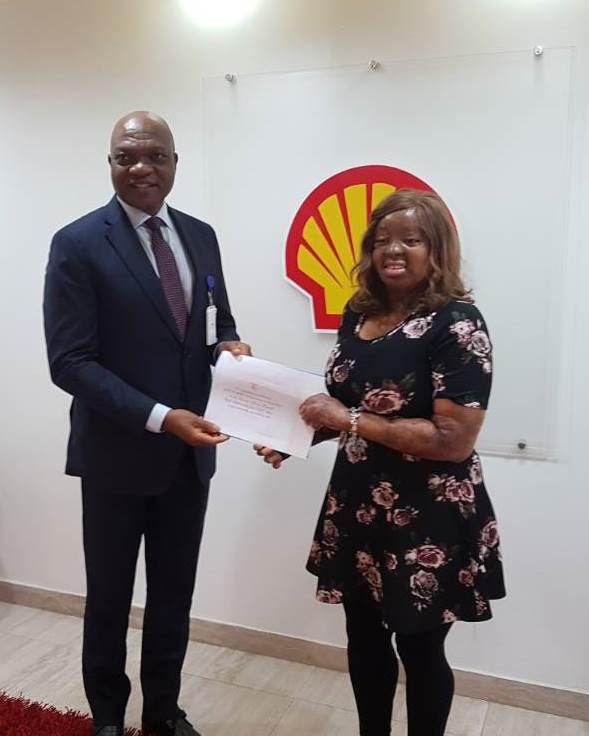 There were emotional scenes as Miss Kechi Okwuchi, a survivor of the 2005 Sosoliso plane crash that claimed many lives visited The Shell Petroleum Development Company of Nigeria Ltd (SPDC) end January to express gratitude for the medical and financial assistance the company rendered to her after the tragic incident. Kechi, her father’s friend, Mazi Victor Okoronkwo and her aunty, Mrs. Uloma Umeano were received by Mr. Osagie Okunbor, Managing Director, SPDC and Country Chair, Shell Companies in Nigeria. Kechi, who was returning from school in Abuja to Port Harcourt, survived the crash but suffered third-degree burns. When her plight came to the notice of SPDC, the company promptly stepped in and ensured that she was air-lifted to South Africa for immediate medical attention and treatment. She later moved to the United States where she has undergone several surgeries with SPDC’s continued financial support.

Kechi’s father, Mr. Okwuchi, in a letter read by Mazi Okoronkwo said “On December 10, 2005, Shell intervened, notwithstanding the medical uncertainty to save life regardless of cost; intervention propelled by a corporate policy that puts life above else. We thank and applaud you for it.” Kechi said during her ‘thank you’ mission: “I am incredibly grateful and I walk through every day of my life knowing that I am here today because of the amount of effort SPDC put into making sure that I stayed alive…you came when all looked dark and you shone a light of hope into my life.”  She shared how her family would remain grateful to SPDC for ensuring she received the best medical care available. ‘I have never seen this kind of kindness from a corporation before,’ she added. Kechi also presented a certificate of recognition from the Shriners Hospitals for Children (Galveston, Texas) to SPDC for its thoughtful and generous contribution to the hospital.

Mr. Okunbor responded: “it was instinctive for us as an organisation to react the way we did as the most important thing for us then was to save and preserve lives. Even though we were not directly involved, the leadership decided that we had to intervene and do all we could as a company to help and today, I am happy we did.”

OkwuchiShellSosoliso
Share
Subscribe to our newsletter
Sign up here to get the latest news, updates and special offers delivered directly to your inbox.
You can unsubscribe at any time