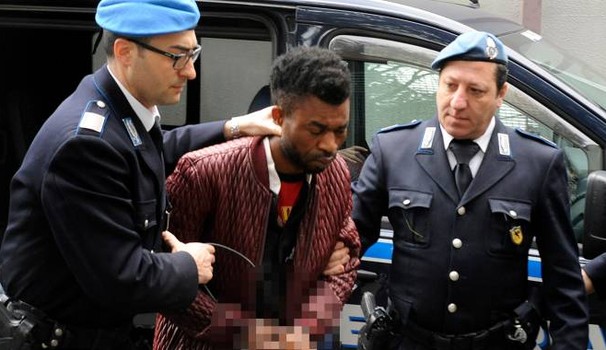 Sporting a neo-Nazi tattoo on his forehead and an Italian flag draped across his shoulders, a  man allegedly terrorized an Italian city Saturday by shooting six African immigrants in a two-hour gun spree.

Luca Traini took aim at his victims from the window of his car, according to reports, as he cruised through Macerata, a city of 43,000 about 150 miles northeast of Rome, where a Nigerian man Innocent Oseghale, 29, was arrested in the horrific killing of 18-year-old Pamela Mastropientro, an Italian.

“He drove around in his car and when he saw any African, he shot them,” said Marcello Mancini, a Macerata resident.

Pamela’s dismembered body was found Wednesday in two suitcases, two days after she walked away from a drug-rehab center.

Suspicion fell on the local African community after witnesses said they saw Nigerian asylum seeker Innocent Oseghale, with the suitcases in which Mastropietro’s remains were found.

A Nigerian woman shot by the gunman says she no longer feels free to walk around the city “with peace of mind” after the attack.

The 29-year-old, identified only as Jennifer, said that “I never hurt anyone. I was talking and laughing with three other people” when she was struck by the bullet.

Hospital officials say she suffered a fracture to her humerus bone in her arm and is facing an operation Sunday.

Her boyfriend said  they were waiting at a bus station when he saw a man pointing something at them from a car. Ogie Igbinowania says “I gave Jennifer a push to get her out of the way and threw myself down. And I heard a shot: Boom.”

Pamela, an 18 year- old girl, had been missing for days. The mother announced her disappearance to the police which had been looking for her until a driver found 2 abandoned bags by the side of a road, bags that when investigated where found to be containing the body of a young woman cut into pieces, perfectly clean.

After police scrutiny, the experts established that the body found by the driver was the body of the missing girl Pamela. In the evening of yesterday, a Innocent Oseghale was stopped and taken into custody by the police, already known to the authorities (Permit to stay in Italy expired and already arrested for selling drugs).

Oseghale caught in a recording (from a private camera owned by a Pharmacy in Macerata) while he was tailing the girl. The Nigerian denied to be the culprit behind the terrible crime and instead provided names of other people as potential suspects.

The police are now investigating the past of the victim who used to be living in a rehab which she left on purpose, it is very likely that the victim was wandering around the city and met the wrong people who ended up being her executioners.