Davos Day One: African leaders in one voice say continent is ‘open for business’

By Per Second News Last updated Jan 25, 2018
Share
Billionaires, world leaders and investors are gathering in Davos-Kosters, Switzerland for the World Economic Forum’s annual meeting.
Prime Minister Narendra Modi on Tuesday addressed the opening session of the (WEF 2018), becoming the first Indian prime minister in two decades to join the world’s top business leaders in the Swiss resort town of Davos.Modi outlined climate change, terrorism and protectionism as three global threats, even as he projected India as a favourable investment destination.

African leaders said the continent is ‘Open for Business’  Zimbabwe’s Mnangagwa said his ‘message is simple’. He will be telling the delegates at the forum that ‘the new Zimbabwe is open for business, looking to the future and ready to take its place among the family of nations’.

“Nigeria, the largest economy in Africa will be getting involved in the manufacturing global chain and it would be private sector led, government would be backing it up, said Vice President Yemi Osinbajo in a meeting with Japan External Trade Organization, JETRO, led by Mr. Hiroyuki Ishige, the organization’s Chairman and CEO.

CEO of the Tony Elumelu Foundation, Parminder Vir, in a message said , “we’re seeking more robust engagement by the global economic community on #AfricanEntrepreneurs. We’ll share the progress startups are making in tackling unemployment across Africa. 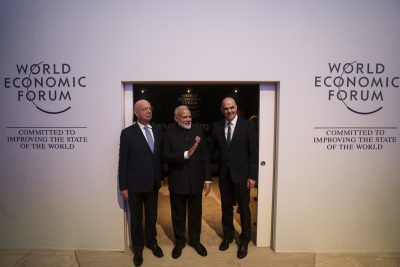 ‘‘We have launched a $500 million fund to support businesses in Africa that are producing power in a decentralised way,’‘ said AfDB’s  Akinwunmi Adesina.

‘‘I am here to tell the Nigerian story, how we are using new technology to drive financial inclusion. It’s time to tell stories of what we are doing right and how, together, we can scale it,’‘ said Diamond Bank CEO Uzoma Dozie.