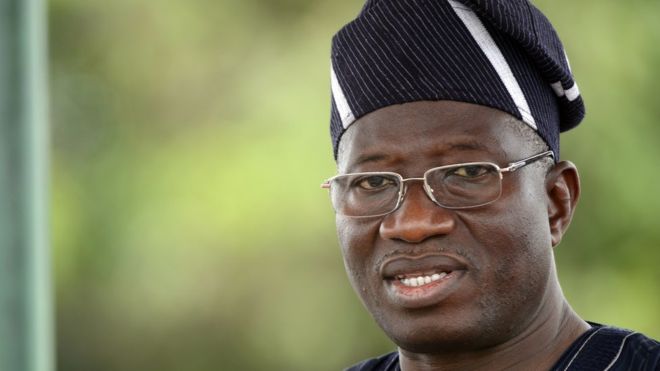 Former Nigeria’s Ambassador to the Nordic countries of Sweden, Denmark, Finland and Norway, Ambassador Godknows Igali, has revealed that former president Goodluck Jonathan came out of the presidency not only dead broke, but in debt.

Amb Igali, a close ally of the former leader said that contrary to the pictures being painted of former president, Goodluck Jonathan, he is one of poorest former Nigerian leaders, even in Africa, in recent years.

“Indeed Jonathan is still struggling to pay some election liabilities from 2015 till today, he said in an interactive session with selected journalists over the week-end.

“Despite all the stories of flying billions, Jonathan borrowed money to prosecute some aspects of his election and he is struggling in different ways to meet up.”

The former Permanent Secretary in both Ministries of Power and Water Resources, stated that Jonathan left government bankrupt compared to most of his predecessors.

He stated that even with the corruption accusations against his regime, non of the corruption cases have so far been linked directly to the former president.

“Am glad that some of you Journalists are privileged to know where he (Jonathan) lives and where he has his private offices in this country. I do not think president Jonathan can be considered a very rich man. You must realize that none of those corruption allegations has been personally linked to him. Jonathan is not a rich man, take it from me. He may be comfortable but not rich. But l know that his pension as a former president is enough to take care of him”.

He described Jonathan as a “modest” man whose lifestyle and background were humble.  There’s a lot of untruths that is being said about him, but l believe history will be very fair to him. He is a very simple man. His background and lifestyle are very simple. He is not jingoistic.

“As a former president, when Jonathan needs an aircraft, the federal government will give him particularly if he is going on an important official assignment. But if it is his private trip, he has to fend for himself. He travels on commercial aircraft but when it is not convenient for him that he has to rush to somewhere, Azikel Group helps him.

“The man is from the same Ogbia local government like him. He takes it as his duty to help him. I think we are quite grateful to Dr Iruani for helping Jonathan out all the time”.

Igali who was also a former Nigeria’s Ambassador to Venezuela and Cameroon at different times described as sad the way Jonathan’s administration  was being discredited as if nothing good in terms of positive achievements for the country were done by his administration, insisting that only God and history will vindicate Jonathan at the end of the day.

“In Nigeria, people just believe all kinds of things and they believe Jonathan or everybody who have served in government is a billionaire. Sometimes when you tell them you don’t have money, they will laugh and say you are deceiving people. But we leave that to God. So all these big big money that are being mentioned is very funny.”

Igali who is a tropical Environmentalist, a Climate Change Advocate and a former Secretary to the Bayelsa State Government, however pointed out that Jonathan is the most abused Nigeria’s president both in and out of power. He stated that some of them who are associates and officials of the former leader like himself, knew that their current travails would come.

“Before Jonathan left power, he said he is the most abused president in Nigeria. I agree with him. As a public figure, he knows that all kinds of attacks on him will come. Like the great Winston Churchill of the United Kingdom whose contemporaries vilified him, history will bear him right. He will, in no distant time, be venerated and celebrated, and his memory in this country and around the world will ever be remembered as a man of peace. The other day some people from the United Nations came to share thoughts on his peace and conflict resolution and management matters. He is a man of peace and history will remember him. The world has not seen this kind of thing in Africa.

“Jonathan is the only president or major presidential candidate in the history of this country who refused to go to court to challenge his election result. He also ordered that posters of him should be removed everywhere around the country. He said his ambition is not worth anybody’s blood and he lived up to his words. So whatever is happening to him now and to those people around him, we leave it to God because God rules in the affairs of men. No matter how dark the night is, there comes light at the end of the day.

“Look at Cameroon where l served as a Nigerian Consul General, one man (President  Paul Biya) has been there in power for over 40 years. The same with the case of  Equatorial Guinea, Uganda, etc. But Jonathan peacefully left office without even a whimper. Like a sacrificial lamb, he just handed over power. How many Nigeria’s sitting presidents can do that? Let’s leave him, he’s fine. God will vindicate him.

“So when he saw that people were going to injure themselves after the 2015 election if he challenged the result, he quietly decided to step out. Jonathan that l know is a gentleman. This country gave him the opportunity to be president. How many Nigerians enjoyed that opportunity? He came to solve problems as president of Nigeria and he did his best. History will judge him accordingly, not man. If anybody thought he was giving Jonathan problem or wants to malign him now, it is between him and God.

“A man that avoided bloodshed in this country, you think God will forget him. Thousands of people in this country could have died if he had resisted or challenged that 2015 election result, but he just saved the nation all that avoidable calamity and worked away. You locked up the people that worked with him and you think God will just forget him. So let us watch and see! God is the one who gives power. This country has been fair to Jonathan and allowed him to rule and he has done his bits and left office.

“The fall-outs, the attacks and the vilification of his name will be judged by God Almighty. All those kind of things will come. Whoever thinks he can play God is wasting his time because only God rules in the affairs of men. Any man who goes into public office should be able to fortify himself spiritually because storms will come. Lies, blackmails and scandals will surely come his way.”