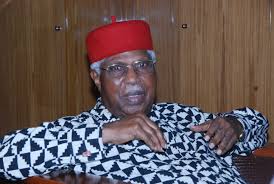 Addressing newsmen Thursday, the Secretary to the Government of the Federation, Boss Mustapha, who chairs the national burial committee, said it is to ensure that the late elder statesman gets a a befitting burial.

“The death of Alex Ekwueme is indeed a painful loss, not only to his family but to our great nation Nigeria, said Minister of Labour and Productivity, Chris Ngige at the briefing.

“His life was dedicated to the service of our beloved country Nigeria, said Ngige who represented the SGF.

“And as the military tribunal panel stated after he and other leaders were detained as a result of the Nigerian military coup d’etat that sacked the civilian government of December 31, 1983, that ‘Dr. Ekwueme had left politics  much poorer than he was when he entered it,’ and has also stated that to ask for more from him was to set a standard in Public life which even saints could not meet.”

Mustapha assured that the government both at the federal and South East levels will be fully represented.

“As we mourn his painful demise with utmost sympathy to the bereaved family, let me also use this medium to assure you that the federal and south east governments will be adequately represented at the final funeral rites.

“We also urge all individuals and professional groups whose lives and interests were touched in one way or the other by our departed statesman, to be part of the burial ceremonies, as we pay Late Dr. Alex Ekwueme our last respects.”

The final funeral programme as released by the SGF’s office shows that in Lagos on Friday January 19th, there will be Memorial Service by  2pm at Cathedral Church of Christ Marina, Lagos. While Evening of Tributes and  Music is for 5pm same day at The Landmark, Oniru.

On Sunday, January 28th, 6pm, there will be another Evening of Tributes at the International Conference Centre, Abuja.

The January 29th, there will be Parade of Honour, at the Presidential Wing Nnamdi Azikiwe International Airport, Abuja.

The body will then departs immediately to Enugu and will be received by the South East Governor’s at the Akanu Ibiam International national Airport, Enugu.

On January 30th, at 4pm there will be Service of Songs at  Cathedral Church of the Good Shepherd, Independence Layout, Enugu

On January 31st, at Enugu, there will be South East Zone Commendation Ceremonies by 10am at Okpara Square.

Same day at 4pm. Body departs for Oko By Motorcade and by 5pm there will be Service of Songs.

On February 2nd, Lying in State at 8am and funeral service at St. John the Divine Church Oko and final funereal rites  at 11am.

The Federal Government is footing the bill for the burial which includes transporting the corpse from London to Nigeria.

Others are Pastor Goodheart Obi Ekwueme, the SSG, Anambra State, Prof. Osita Chukwulobelu and the Permanent   Secretary,   General   Services   Office,   Dr.   Roy   Ugo,will serve as the Secretary of the committee, according to a statement signed by Deputy Director (Press) Office Secretary to the Government of the Federation, Mohammed Nakorji.

Alex Ekwueme
Share
Subscribe to our newsletter
Sign up here to get the latest news, updates and special offers delivered directly to your inbox.
You can unsubscribe at any time