Wike is making it harder to keep Rivers safe- Ameachi 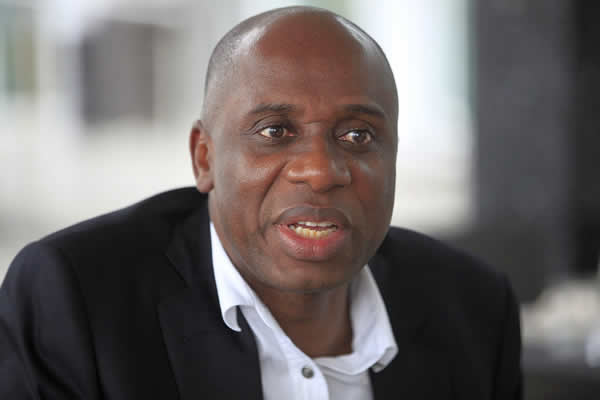 Following the new year tragedy that occurred in Rivers State where gunmen opened fire indiscriminately killing 21 people returning from church in the early hours of Monday, the Minister of Transportation, Rotimi Amaechi, said governor Nyesom Wike, should be blamed for the mayhem.

“I think the governor needs to get a bit more serious, he should stop encouraging the militant groups in the name of politics and election, he said, while reacting to the latest killings in Rivers State.

“Too much noise coming from Rivers State, the governor just wakes up and starts shouting, abusing people that’s all he does. Mr. Project painting roads, the first thing you do is human capacity development and keeping human beings safe and we are losing lives every day, he said at the Villa.

“I was governor of Rivers State, I did not play PDP/APC politics, life is life it has no symbol. Nobody has APC life or PDP life. The first responsibility of a governor which is what the oath of office requires, is that you swear to protect lives and property. When you don’t protect life and property what do you do? Is impeachment. Unfortunately there is no House of Assembly in Rivers State.

“Two important men were kidnapped before I left Port Harcourt, the first person is Chief Adoki till today, nearly one month after nobody can tell you where he is. The next person is Chief Omogu, he was kidnapped luckily the villagers ran after the people and rescued the old man from the bush.

“It never happened when I was governor. We (the security and myself) ensured that we will not sleep at night. We stayed awake for the citizens to sleep, I think the governor needs to do much more than that or quit the office.”

Asked what he thinks Wike lacks, Amaechi said, “I just don’t know because the things are there for him to work with. He is not like me when during my second term President Goodluck Jonathan took away Police, SSS, the Army brigade commander couldn’t visit me but in his case everyone is disposed to him. He can see the commissioner of Police, director SSS, unlike my period but we fought insecurity. But because he needs these people for election purpose  that is why they are still there, that is why they are killing we need much more than that.

“Unfortunately, I swore not to be talking about Rivers anymore but you don’t keep quite in the face of 21 lives, you can’t just keep quite. I have said it that nobody should criticize his successor let him do his beat but a successor that watches the lives of people go like that and does not care? God will bless him!”

Ameachi said even though he has promised not to talk about Rivers, he added that nobody should keep quite after the deaths of 21 residents killed by gunmen.

Amaechi had last December advised that “We must now move away from accusing past administrations and focus on developing Nigeria.”

He had said for Nigeria to move on, it must stop the blame game and stop talking about what the past administration could not achieve.

AmaechiRiversWike
Share
Subscribe to our newsletter
Sign up here to get the latest news, updates and special offers delivered directly to your inbox.
You can unsubscribe at any time

Liberia: The Rise of George Weah by Reuben Abati