Lasting solution to feud over mine ownership lies in court, says BUA, Dangote

[dropcap]T[/dropcap]he ownership struggle that has been brewing for months between the BUA International Limited, owners of BUA Cement and Dangote Group will finally be decided at the law court, according to both parties Wednesday.

In a document to the Nigeria Stock Exchange, NSE, dated 19th December, 2017, and signed by Dangote’s company secretary, Mahmud Kazaure, the group said that the disputes shall be resolved by the courts in accordance with their role under the constitution and laws of the Federal Republic of Nigeria.

At the heart of the battle between the two cement giants, the Dangote group was  accused of willful attempt to disregard the judicial process and scheme a viable competitor out of business.

” This is in line with what BUA has always insisted and we appreciate the decision to wait for a judicial outcome rather than resorting to self-help and/or using influence and certain agencies of government in disrupting operations at some of BUA’s mining areas covered by ML18912 and ML18913 in Obu, Okpella, Edo State, said O’tega Ogra, BUA’s Group Head, Corporate Communications in response to Dangote’s statement. 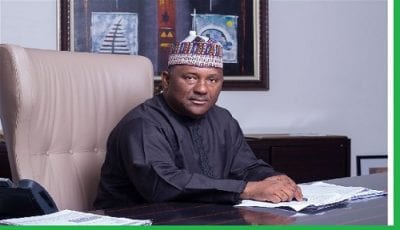 “BUA also hopes that with the statement by Dangote Cement Plc, this will put an end to the continued cycle of harassment or clandestine moves by certain stakeholders to usurp the powers of the courts and disrupt operations at our site in a clear disregard of existing court directives.”

” BUA remains resolute and unequivocal about its stand that ‘Status Quo be preserved’ as instructed by the Federal High Court sitting in Benin in Suit No. FHC/B/CS/7/2016 BUA International Limited & BUA Cement vs. Hon. Minister of Mines & Steel Development and Dangote Cement Plc.”

“For the purpose of clarity, this means that BUA remains in possession of the Mining Areas covered by Mining Leases 18912 and 18913 in Obu, Okpella, Edo State and will continue to exercise its rights to operate those mines in line with the dictates of the courts.  If anyone or any stakeholder (especially the Ministry) remains in doubt as to what ‘Status Quo’ means in this case, they are free to write to the courts for an interpretation.”

“BUA also affirms that it fully intends to abide by the outcomes of the judicial process as provided by the laws and Constitution of the Federal Republic of Nigeria.”

“BUA therefore enjoins and urges all stakeholders involved – not limited to the Edo State Government, the Ministry of Mines and Steel  and other parties – to also await the outcome of the judicial process in the interest of a competitive business climate governed by the rule of law in Nigeria.”

BUADnagotemine
Share
Subscribe to our newsletter
Sign up here to get the latest news, updates and special offers delivered directly to your inbox.
You can unsubscribe at any time

A growing chorus of political parties are calling on Gov Ayade’s resignation over N1.3 trillion 2018 budget