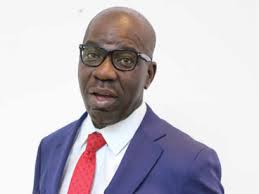 Share
Citing security concerns arising from the proclamation by the Federal Ministry of mines that illegal mining activities are being carried out at the contentious Obu mines in Okpella, Edo state, the Governor, Godwin Obaseki yesterday shut down the mines until further notice.
The governor said the decision was taken in the interest of peace and tranquility, pointing out that flouting of his order will be met with wrath of the state government.
Consequently, the governor directed the state police Commissioner and the Army Brigade Commander in the state to halt further operations at the Obu mines with immediate effect.
It would be recalled that the ownership of the mines has been a subject of dispute between the Africa’s leading Cement manufacturers, Dangote Cement Plc and Bua Cement, which the Federal Ministry of Mines had asked to vacate the mines because it was an exploiting limestones in the area illegally.
Obaseki made the announcement while receiving in his office Community heads and Chiefs of Ukhomunyio Okpella, whose community is hosting the disputed mines and had come to express reservation at the alleged use of youths as militia to enforce perceived rights to ownership of the mines and thus creating security threat to the peace of the people.
The governor described Okpella as the mineral gem of Edo state and as such mineral resources ought to be a blessing to the people of the state “but regrettably, the situation on ground has degenerated to a security threat and therefore there is the need to nip it in the bud.
“The Federal Ministry of Mines which has authority over the mines has proclaimed that what we have there now is illegal mining and we don’t want break down of law and order. The situation has degenerated badly.
“Those of you were concerned have moved and tried to resolve the matter, we lost two of the people on the road to Benin while on the trouble shooting mission to Benin.  We had a meeting in Abuja two weeks ago and we analysed the Obu mines issue.
“Two people cant lay claim to one asset, until the court decides the ownership or the federal supervising agency, the Ministry of Mines says otherwise, I am closing down that Obu mines with immediate effect . because we believe there is globally acceptable way of determining ownership in a contentious matter as this without recourse to self help”
The governor noted that mines is on the exclusive list of the federal government and the ministry said there is illegal mining going on there, “from today there will be no further mining operations in Obu”
The Okpela Chiefs applauded the government decision and declared their loyalty to the state government saying the decision will bring relief to the people who have been living under fear.
Edo
Share
Subscribe to our newsletter
Sign up here to get the latest news, updates and special offers delivered directly to your inbox.
You can unsubscribe at any time

BUA Stands Firm Against Dangote’s Bullying, Says We Will Not Be Intimidated or Unnerved