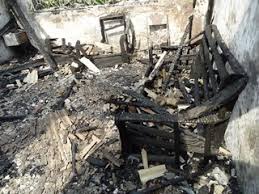 Fire investigators  in Lagos were looking into the cause of a pre-dawn fire Tuesday which killed four members of at No. 13, Buraimoh street, Bariga area of Lagos.
“The apartment is a chemist store. The father, mother, and two children of ages five and eight were found dead inside the store, said Director of Lagos State Fire Service, Mr. Rasak Fadipe, while confirming the incident.

“ We advise that although one needs security in his or her house or business place, it should not be to the detriment of the people.

“Members of the family should always know the exit of their apartment whenever there is an emergency,” the director said.

He said personnel of the service got to the scene of the incident as soon as they got information about the fire, but that due to the double burglary irons on the door and window of the apartment, they were unable to reach the victims in time.
Lagos fire
Share
Subscribe to our newsletter
Sign up here to get the latest news, updates and special offers delivered directly to your inbox.
You can unsubscribe at any time