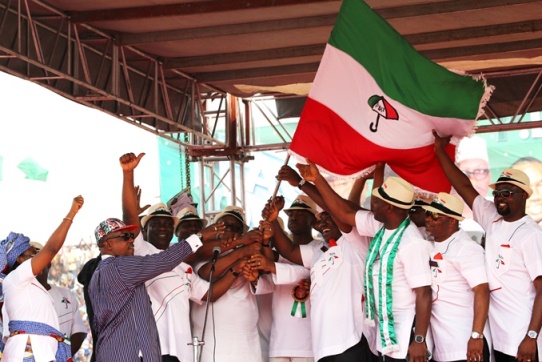 Abuja – The scheduled November 9, 2017 National Convention of the Peoples Democratic Party may hit another dangerous storm that may further factionalise it except the Senato Ahmed Makarfi-led National Caretaker Committee take urgent steps to address genuine concerns of candidates.

Checks by Persecond News indicate the emergence of a so called “unity list” of anointed candidates and the foisting of unpopular candidates as against allowing for a free and fair convention.

The PDP became factionalised in Port Harcourt after it lost the 2015 presidential election but managed to pull through the storm after the Supreme Court ruled in favour of the Senator Makarfi-led National Caretaker Committee.

As a way forward, the Makarfi-led Caretaker Committee has scheduled to hold a National Convention on December 9, 2017.

Ahead of the December convention, but some candidates for the various offices in the convention are speaking in hush voices kicking against the emergence of a list called “Unity lists” of endorsed candidates.

One of the candidates confided in our correspondent on condition of anonymity that many members of the party are not comfortable with the offensive so called “unity list,” warning that other candidates that are in the majority, their supporters and other members may resolve to leave the party if the planned imposition of candidates is allowed to take place.

According to him; “The idea of having a unity list is an indication that the PDP is still promoting impunity, lack of internal democracy and has not learnt from its past mistakes.

“We expect that the convention will be keenly contested and its outcome not pre-determined. It is better for all the contestants to face the delegates and let the delegates choose their leaders in a free, fair and transparent convention.

“All the contestants bought forms and indicated their interests to vie for different offices. They should be allowed to contest the election in a free, fair and transparent manner to avoid another crisis.

“The Chairman of the Caretaker Committee, Senator Ahmed Makarfi, who once apologised to members of the party for the impunity that once reigned in the party and pledged that imposition of candidates at conventions and congresses would no longer be allowed in the party, should observe and keep to his promise.

“We the other contestants are making a passionate appeal to all the organs of the party namely the Board of Trustees (BOT), National Executive Committee (NEC), National Working Committee (NWC) and the PDP Governors Forum to critically look at the unity list because of its potential to destroy our party. The onus is on the party to do the right thing by allowing a level playing field during the convention,” he said.

The concerned candidate applauded the various party leaders who spoke against an earlier plot to micro-zone positions and appealed to them to take the same steps against the unity list in order to save the party from collapse.