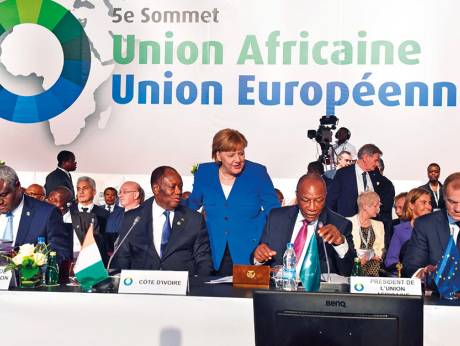 The decision was taken after Ivory Coast President Alassane Ouattara called for “all urgent measures” to end slave trading and other migrant abuses in Libya at an EU-Africa summit in Abidjan.

The leaders of Libya, France, Germany, Chad, Niger and four other countries “decided on an extreme emergency operation to evacuate from Libya those who want to be”, Macron told reporters after their emergency talks on the summit sidelines.

The summit comes just two weeks after US network CNN aired footage of black Africans sold as slaves in Libya, sparking outrage from political leaders and street protests in African and European capitals.

“Libya restated its agreement to identify the camps where barbaric scenes have been identified,” Macron said, adding Libya’s UN-backed Prime Minister Fayez “Sarraj gave his agreement that access be assured”.

Opening a European Union-Africa summit that was meant to focus on the continent’s long-term economic development, Ouattara immediately lashed out at slavery as a “wretched drama which recalls the worst hours of human history.”

Other African, EU and United Nations leaders also condemned the slavery revelations when they met at the summit in Ivory Coast’s economic capital Abidjan.

“I would like to appeal to our sense of responsibility to take all urgent measures to put an end to that practice, which belongs to another age,” he said, opening the gathering of 55 African Union and 28 EU leaders.

African Union and other critics have accused the EU of creating conditions for the slave trade as well as rape and torture of migrants by encouraging Libya’s UN-backed Government of National Accord (GNA) to detain migrants and stop them from coming to Europe.

Migrant
Share
Subscribe to our newsletter
Sign up here to get the latest news, updates and special offers delivered directly to your inbox.
You can unsubscribe at any time