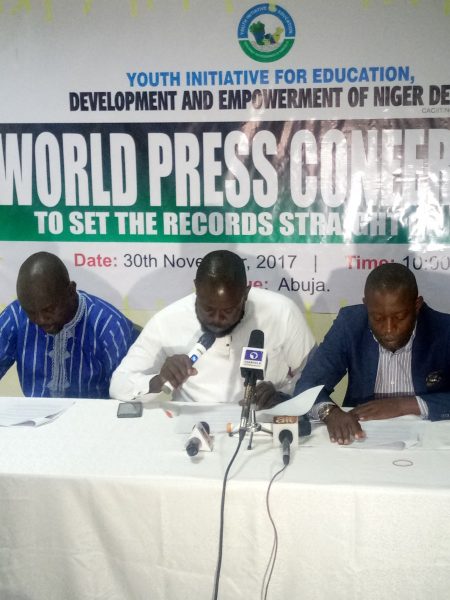 Abuja – The Youth Initiative for Education, Development and Empowerment of Niger Delta (YIFEDEND), on Thursday castigated the the Minister of State for Agriculture, Senator Heineken Lokpobiri for allowing himself to be railroaded into destabalising the good works of the Niger Delta Developmnt Commission (NDDC).

The organisation vowed that the people of the region and the rest of the country will resist any attempt to subvert their interest with selfish elitists’ interests that do not take them into consideration.

President of YIFEDEND, Ambassador Agbonkpolor Splendor, who stated the position of the group at a press conference in Abuja, described as reprehensible the activities of Senator Lokpobiri and his taskmaster through their consistent and misguided attacks on the administration of Senator Victor Ndoma-Egba as Chairman and Nsima Ekere as Managing Director of the Commission.

The YIFEDEND condemned the insistence by Lokpobiri that the tenure of the present Board of the NDDC should expire December 2017 on the basis of the spurious claim that the said Board was appointed to complete the tenure of the one it succeeded.

Ambassador Splendor, who was accompanied by Comrade Danesi Momoh and Dominic Ogarku, further said that it is embarrassing that Lokpobiri and former Governor of Bayelsa State, Timipre Silver rather than to support the decision of President Muhammadu Buhari on the NDDC Board, decided to try to ridicule the President before right thinking Nigerians and as well as an utter disrespect for the high office of the President and all that it represents.

He further said; “One needs to commend President Buhari for the clarity that the sacked Board did not complete its full tenure, and so appropriate and equitable to give the various states their due in the new Board. President Buhari’s action could not, therefore, be seen as a fulfilment of any legal obligations specifically imposed by section 5, subsection 3 of the enabling law.

“Only mischief makers will look at it otherwise. He acted in fulfilment of his power to appoint the Board, under the Act, and pursuant to his discretion to constitute the Board howsoever he deems fit, in so far as he does not break the law in exercising that discretion.

“In any case, even assuming, without conceding, that the present Board, despite its clear fresh mandate and lack of any nexus whatsoever with the previous Board, is nevertheless extraordinary completing the tenure of that Board, how can its tenure be deemed to expire this December when there was a sole Administrator from Rivers State, who served quite a while and comes from a state other than that of the sacked or present Managing Director?

“For the avoidance of doubt, what the Act provides for is a vacancy existing on the Board and for such to be filled for the person to complete the tenure of the former occupant, not a situation where an entire Board is dissolved and an acting Managing Director had even served.

“Letters of appointment given to the current Board clearly spelt out the terms on which they were engaged and to call for such to be retracted is a call to rule of anarchy in a country governed by clearly spelt out laws,” splendor explained.

He commended the present Board of the NDDC under the leadership of Senator Ndoma-Egba and Nsima Ekere as Managing Director for the exceptional job of clearing the backlog of unpaid contractors while ensuring that projects are spread across the entire region to uplift the living standards of the people of the region.

Splendor therefore warned former Governor Syva and Senator Lokpobiri to desist from attempting to subvert the gains of change in the region but should cooperate with the current management of NDDC for the progress of the region.

The YIFEDEND President therefore called on the federal government to ignore all calls capable of balkanizing the nation by vested interest that have benefited from the rot that was perpetuated over the course of previous regimes and forge ahead with the task of cleansing all facets of national life.

LokpobiriNDDCSylva
Share
Subscribe to our newsletter
Sign up here to get the latest news, updates and special offers delivered directly to your inbox.
You can unsubscribe at any time