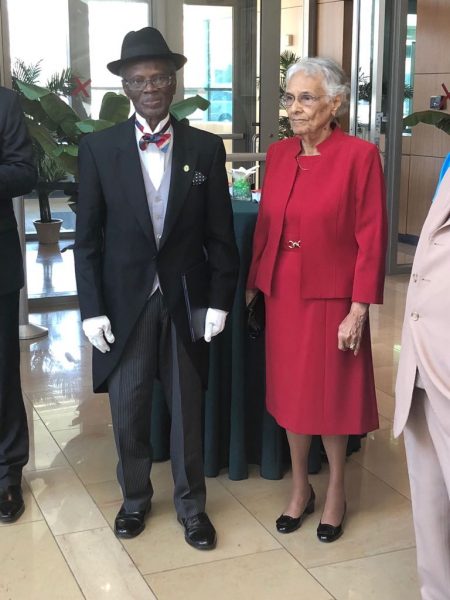 [dropcap]A[/dropcap]mbassador Sylvanus Nsofor and his wife at a reception at the Embassy of Nigeria, Washington, after he presented his letter of credence to the U.S president.

Hon. Justice Sylvanus. A Nsofor,  82, who is from Imo State, was born on March 17, 1935‎ in Oguta, Imo State. He was one-time Judge of the High Court of Nigeria, Justice of the Court of Appeal, and Lecturer in Law, Holborn College of Law, London‎.

Ambassador Sylvanus Nsofor, drew attention during his Senate screening when asked to recite the National Anthem by a member of the Senate committee. He staunchly argued with the lawmakers and refused to recite the anthem as requested. The lawmakers exhausted by the back and forth argument, left in complete surprise at his refusal, were left with no option, but to ask him to take a bow and leave.