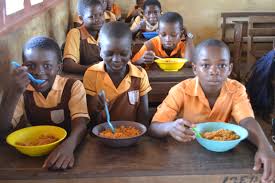 The federal government said on Monday, that over 5 million primary school children

in 19 states were currently enjoying its school feeding programme. Spokesperson to Acting President, Prof. Yemi Osinbajo, Laolu Akande, provided details of the programme in a statement.

The programme involves the Federal Government working with interested and prepared states to provide funding for feeding public primary school pupils.Akande, who listed the 14 benefitting states, said a total of N6,204,912,889 had been paid to the 14 states during the school year ending August 2017.

So far, over five million pupils (5,226,039) in 28,249 schools in these states are currently been fed under the programme, while Kano and Katsina states are expected to be added to the beneficiaries states in the coming weeks.

Also, over 50,000 cooks are currently engaged under the programme.

The school feeding programme, which is part of President Muhammadu Buhari administration’s N500 billion National Social Investment Programmes, NSIP, has a target to feed 5.5 million schoolchildren by the end of 2017.

Meanwhile, the School Feeding Programme is collaborating with the Federal Ministry of Health to deliver an integrated deworming programme for pupils in all public primary schools classes 1 to 6 across 17 states currently under the NHGSFP in the country.

The integrated programme, which is scheduled for the first and second week of December in these states, will deliver three different drugs for the treatment of diseases endemic to specific states; particularly schistosomiasis; soil-transmitted helminths and river blindness/onchocerciasis. The drugs to be distributed are Albendazole, Ivermectin and Parazaquintel.

Supported by the Federal Government, three facilitators would be within the states for the period to achieve these objectives and ensure that the pupils in these states are dewormed.

Buhari under mounting pressure to set up national airline