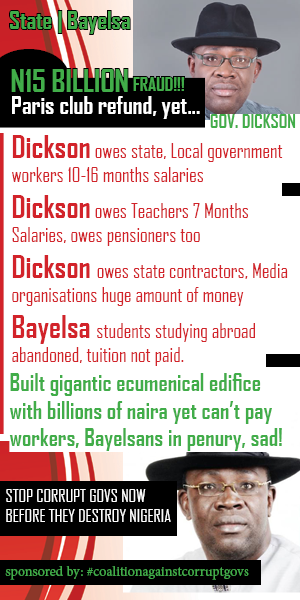 A poster denigrating scandal-plagued governor Seriake Dickson of Bayelsa state as a sinister debtor have become a viral phenomenon, spurring a wider outrage from the public.

Inserted widely in some online news sites, they have sparked copycat variations and struck a chord with Bayelsans outraged by corruption allegations levelled at the governor and his moves to thwart investigations.

He has been accused of owing state, local government workers, teachers in public primary and secondary schools 10-16 months of accumulative salary arrears.

Dickson according to the poster is also owing various media organizations large sums running into several millions of Naira for adverts subscription and PR services.

Pension and gratuity are also being owed the state government despite the bail out and the Paris funds of N15b, according to the image.

The poster according to the coalition against corrupt governors, seeks to “point out the hypocrisies of the governor, to draw attention to these absurdities, and get people to know he’s a chronic debtor.

Dickson is battling accusations that billions of Naira was stolen from the N15b Paris refund, and is under pressure for his leadership style.

He denies accusations that funds was funnelled from the Paris refund, but has fuelled anger by curbing investigations, purging government critics over the scandal, and clamping down on media reporting of it, according to a media practitioner who claims his firm is being owed huge sums of money for services rendered.

BayelsaDickson
Share
Subscribe to our newsletter
Sign up here to get the latest news, updates and special offers delivered directly to your inbox.
You can unsubscribe at any time

The worst of times, the best of times by Reuben Abati